Sri Lanka defeated South Africa by one wicket in the first Test. 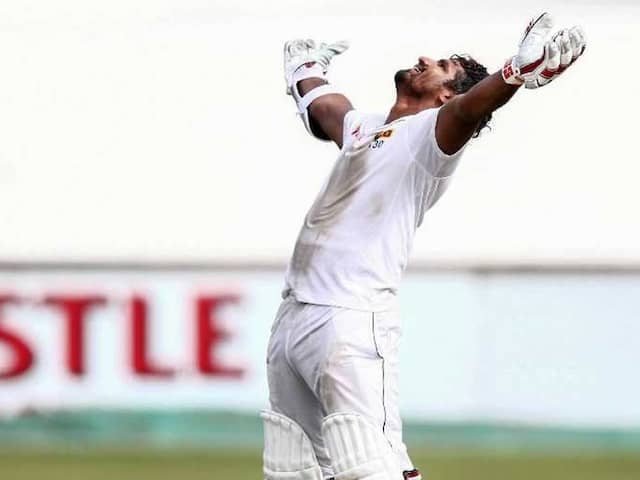 Kusal Perera became a national hero in Sri Lanka on Sunday after scoring an unbeaten 153 to guide his country to a sensational first Test victory in South Africa. The country's cricket legends and politicians lauded Perera, who has become a linchpin for the ailing national side since fighting off doping charges in 2016. Former skipper Kumar Sangakkara, who had staunchly defended Perera when he was suspended in December 2015, called the performance at Kingsmead in Durban on Saturday "unreal".

"What an amazing win," Sangakkara said on Twitter. "One of the best if not THE best overseas win by (Sri Lanka). Kusal Janith Perera was unreal."

What an amazing win. One of the best if not THE best overseas win by @OfficialSLC Kusal Janith Perera was unreal. Congratulations to the team and @CHathurusinghe keep believing and keep fighting. If you compete for long enough the opportunities to win come your way.

Sangakkara stood by Perera when he was wrongfully accused of doping in 2015. The International Cricket Council lifted the suspension in 2016 and apologised for the botched testing.

Another former Sri Lanka skipper Mahela Jayawardena said on Twitter: "What a beauty! One of the best innings under pressure."

What a beauty !!!! One of the best inings under presure. Showed intelligents and mental strength KJP and very proud of you.

Jayawardena said Perera, who put on a last wicket partnership of 78 had shown "intelligence and mental strength".

Perera scored 67 in an unbroken last-wicket stand with Vishwa Fernando which gave his underdog team a sensational victory.

"Great spirit by @kusaljperera and all the youngsters #SAvSL," added Wickremesinghe while thanking the national side which has been the butt of jokes due to poor recent results.

Congratulations @officialslc on a wonderful test win in Durban! Great spirit by @kusaljperera and all the youngsters #SAvSL

I have no words ! Boys made us sooo proud ! I told to have faith they have talent. Weldone Sri Lanka kusal u beauty and welldone boys the rest of the team and staff.

Sri Lanka won the World Cup in 1996 and since has been plagued by management scandals, allegations of corruption and player squabbling.

They were swept 3-0 in a home Test series against England last year and were then beaten in Australia and New Zealand.