Jonny Bairstow thrashed 86 not out off 48 balls as England chased down a victory target of 180 with four balls to spare in Cape Town. 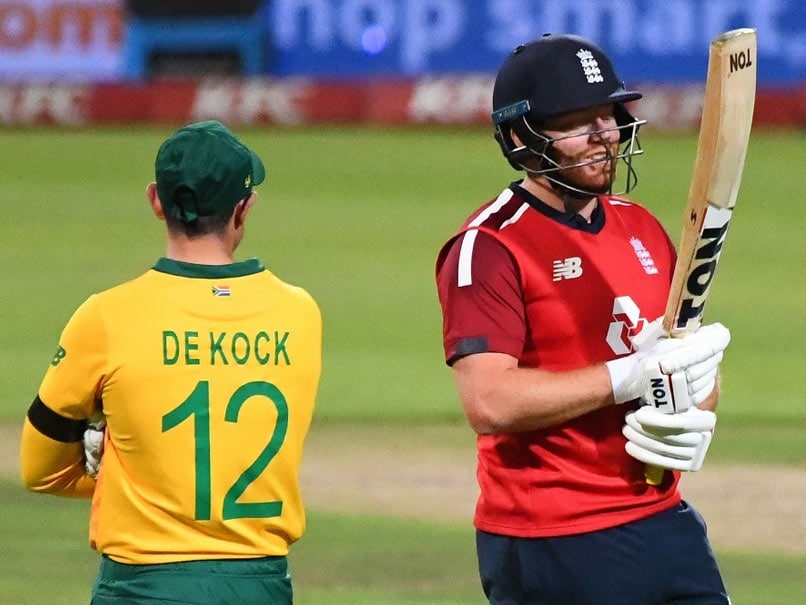 Jonny Bairstow starred with the bat as England beat South Africa in the opening T20I.© AFP

Jonny Bairstow powered England to a five-wicket win over South Africa in the first Twenty20 international at Newlands in Cape Town on Friday. Bairstow thrashed 86 not out off 48 balls as England chased down a victory target of 180 with four balls to spare. England were struggling at 34 for three before Bairstow and Ben Stokes (37) changed the momentum of the match with a fourth wicket stand of 85. Even so, South Africa still had a realistic chance of winning as England went into the last four overs needing 51 runs.

But left-arm fast bowler Beuran Hendricks conceded 28 runs in the 17th over, including three wides which cost eight runs, as Bairstow and England captain Eoin Morgan went on the attack.

Morgan said the win was "extremely pleasing, given that we were pretty average apart from two or three players."

And he was disappointed with the batting start, although he praised Bairstow and Stokes.

"Jonny and Ben rebuilding the way they did set up the win nicely," he told SuperSport television.

Bairstow batted at number four instead of opening as he often does in white-ball cricket.

"It's something you've got to enjoy," he said. "You learn to craft your innings in different ways."

Bairstow hit nine fours and four sixes, finishing the match in style with his fourth six which sailed into a building sight on the northern end of the ground.

Former captain Faf du Plessis top-scored for South Africa with 58 off 40 balls after his side were sent in on a cool evening.

South Africa's first international match since March was staged without spectators because of Covid restrictions.

"I don't think it was just the one over. It was the way Jonny and Ben played. We didn't play badly. They played really well."

The teams meet again in a day game in Paarl on Sunday.

Quinton de Kock South Africa vs England, 1st T20I Cricket
Get the latest updates on IPL Auction 2023 and check out  IPL 2023 and Live Cricket Score. Like us on Facebook or follow us on Twitter for more sports updates. You can also download the NDTV Cricket app for Android or iOS.