South African batsman Rilee Rossouw was found to have been involved in a shoulder barge with Bangladesh's opening batsman Tamim Iqbal, who was walking back after being dismissed during Sunday's second international in Dhaka. 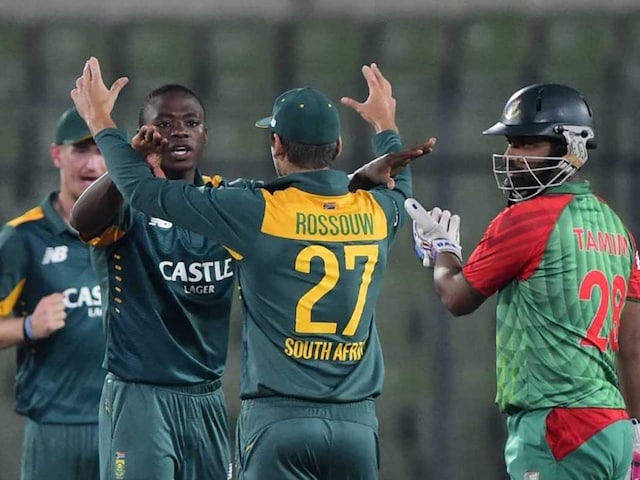 South African batsman Rilee Rossouw has been fined 50 percent of his match fee for a code of conduct breach during a one-day international against Bangladesh, the International Cricket Council said on Monday.

Rossouw, 25, was found to have been involved in a shoulder barge with Bangladesh's opening batsman Tamim Iqbal, who was walking back after being dismissed during Sunday's second international in Dhaka.

Rossouw pleaded guilty over charges of "inappropriate and deliberate physical contact" laid by match referee David Boon and he accepted the penalty, the ICC said in a statement. (Bangladesh Call Up Mustafizur for First Test vs South Africa)

"Rilee was very mature in discussions relating to the charge," Boon was quoted as saying in the statement. "He felt it was inappropriate, but not deliberate, an explanation to which I agree.

"However, there is no place for any form of physical contact in our game and such actions should be punished," he said.

The amount that Rossouw has to pay was not made known.

The third and final match of the series will be held in Chittagong on Wednesday.

Comments
Topics mentioned in this article
South Africa Cricket Team Bangladesh Cricket Team Rilee Rossouw Tamim Iqbal Cricket
Get the latest Cricket news, check out the India cricket schedule, Cricket live score . Like us on Facebook or follow us on Twitter for more sports updates. You can also download the NDTV Cricket app for Android or iOS.