South Africa draws with Australia A in tour match 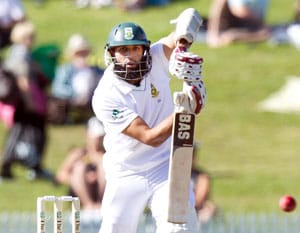 Smith made 60 and Amla 53 before retiring to allow teammates a chance for batting practice in South Africa's only warmup match ahead of the test which starts in Brisbane on Friday.

Dale Steyn then captured the wicket of Liam Davis in a hostile five over spell, described by Rudolph as the fastest he had seen from the world's No. 1 test bowler in seven years.

Steyn intimidated the Australia A top order adding to his first innings haul of 3-54, as Australia A reached 13-1 in 10 overs before the captains agreed to end the match.

Davis lasted 11 balls before being caught behind for a duck, Rob Quiney made 11 not out and Phil Hughes, who received most of Steyn's 150kmh deliveries, faced 27 balls for 1 run. Australia A captain Andrew McDonald described Hughes' innings as "the best one not out I've ever seen."

"I think Dale threw everything at Phil and Phil got through.

"Dale ramped it up from the first innings. I think it was quite evident he was only going to bowl five or six overs so he threw everything at our two batters out there."

Australia A built its innings over the first two days of the match at the Sydney Cricket Ground around Alex Doolan's unbeaten 161, his highest first class score. 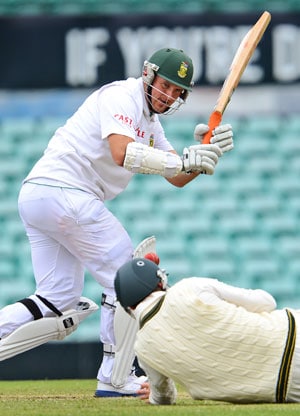 Smith guided the early part of South Africa's reply, hitting 60 then retiring before stumps on the second day when South Africa was 128-1.

Petersen fell to the bowling of part-time spinner Glenn Maxwell, as did Rudolph, who was caught by John Hastings at first slip.

Amla steadied the innings with a patient half century, batting for 109 minutes for his 53 runs and hitting seven fours. Rudolph spent 108 minutes at the crease for his 39 and Duminy took 82 minutes to make 31 before chopping a delivery from Andrew McDonald onto his stumps.

Meanwhile, Australia captain Michael Clarke made 28 in the second innings for his New South Wales state side which was beaten by six wickets by Queensland in a domestic Sheffield Shield match on Sunday.

Test opener David Warner made 39 in his second innings for New South Wales while fast bowler Mitchell Starc made 25 and took 1-36 from six overs.

Comments
Topics mentioned in this article
Graeme Smith Alexander James Doolan Hashim Amla Cricket
Get the latest Cricket news, check out the India cricket schedule, Cricket live score . Like us on Facebook or follow us on Twitter for more sports updates. You can also download the NDTV Cricket app for Android or iOS.