South Africa took control of a weather-disrupted opening day in the third Test against hosts New Zealand, compiling 136-2 on Friday on a wicket expected to favour the bowlers. 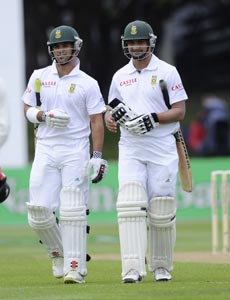 South Africa took control of a weather-disrupted opening day in the third Test against hosts New Zealand, compiling 136-2 on Friday on a wicket expected to favour the bowlers.

At the close of play at Basin Reserve, Alviro Petersen was unbeaten on 44 with JP Duminy on 23, while the New Zealand bowlers were left to rue their failure to capitalise on a green-tinged wicket and overcast conditions.

Only 42 of the possible 90 overs were bowled following overnight rain that ruled out the morning session and bad light forced an early end to the day.

New Zealand captain Ross Taylor had no hesitation opting to bowl when he won the toss saying he hoped "for some early wickets", and had cause to celebrate with the disputed dismissal of Graeme Smith for five and the total at 13.

However, from there the honours rested with South Africa -- who lead the three-Test series 1-0 -- with Hashim Amla (63) and Petersen putting on 93 for the second wicket.

Amla posted his 23rd half-century in an effortless batting display, pushing the bowlers to all corners and offering few opportunities to the field.

He brought up his 50 taking 14 off one over by Dean Brownlie after Taylor turned to the part-timer in a desperate move to break the partnership.

Taylor also had spinner Daniel Vettori operating after only 13 overs as his quick bowlers failed to show the required aggression to dictate terms to South Africa.

Doug Bracewell, the pick of the New Zealand bowlers, was fortunate to claim Smith's wicket, caught behind by Kruger van Wyk in the sixth over.

The South African captain appealed against the decision and television replays were inconclusive with a clear sound as the ball passed the bat but no touch registered with the hotspot detector.

Mark Gillespie, New Zealand's top bowler in the second Test, had difficulty with his line when bowling with the wind in the first session, but had better control and success running into the breeze after the tea break.

He lured Amla into attempting a pull shot with a short pitched delivery and the batsman ended up getting a top edge which was safely claimed by the South Africa-born van Wyk to have the tourists at 106-2.

Bracewell finished the day with one for 30 off 11 overs while Gillespie had one for 37 off nine overs.