Sourav Ganguly will take charge as President of the BCCI on October 23, while Jay Shah will get the Secretary's post and Arun Dhumal will be the Treasurer. 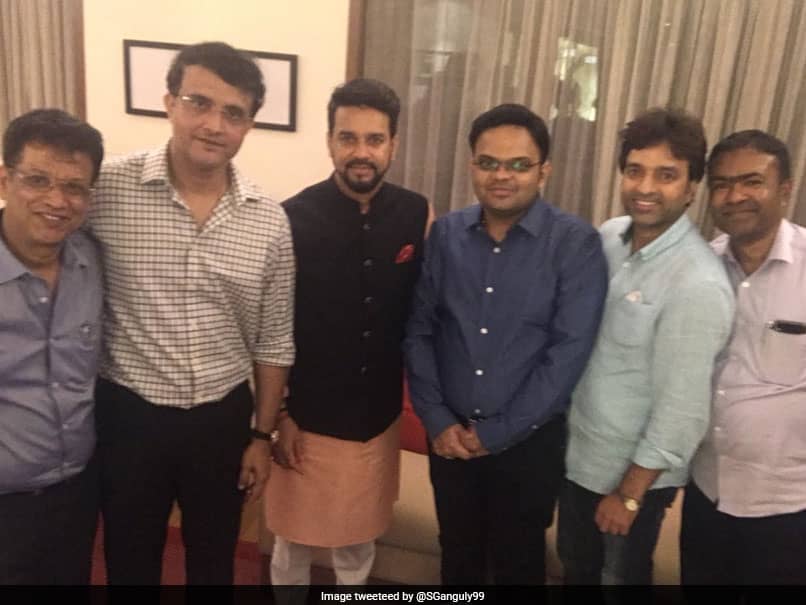 Sourav Ganguly, who will take over as president of the Board of Control for Cricket in India on October 23, tweeted a photo with his new team. "The new team at. @bcci .. hopefully we can work well .. anurag thakur thank you for seeing this through," he wrote on Twitter. Sourav Ganguly is seen standing with Jay Shah, Arun Dhumal Jayesh George and Mahim Verma, who are all set to be part of his team at the board. Former BCCI chief, Anurag Thakur, is also in the picture.

Jay Shah, son of Union Home Minister Amit Shah, is set to be the new Secretary of the BCCI while Arun Dhumal, who is Anurag Thakur's brother, is going to be the board's new Treasurer. Jayesh George will be the new Joint Secretary and Mahim Verma will be the Vice President.

Anurag Thakur, who is currently the Minister of State for Finance and Corporate Affairs, reportedly played a big role in Ganguly getting the top job at the BCCI.

After filing the nomination in Mumbai, Sourav Ganguly addressed the media and said he wants to bring normalcy back in the Indian cricket board, adding that he never expressed any aspiration to become the BCCI President.

"Hopefully in the next few months, we can put everything in place and bring back normalcy in Indian cricket," Sourav Ganguly told reporters on Monday.

"I had never expressed my aspirations for this post. I never spoke to anyone. Until 10:30 in the night yesterday, I was not aware of this. Then I was informed that I have to be the President of the BCCI," the former India captain added.

The 47-year-old said he has a "lot of work to do" as it is a big responsibility to manage the board of a highly-impressive Indian team."Indian cricket administration has to be the best in the world. We have to get the administration in order."

Comments
Topics mentioned in this article
Sourav Ganguly BCCI Cricket
Get the latest updates on India vs England Series, India vs England , live score and IPL 2021 Auction . Like us on Facebook or follow us on Twitter for more sports updates. You can also download the NDTV Cricket app for Android or iOS.