The 11th President of India, A.P.J. Kalam served the nation in various capacities and was known as the 'Missile Man' after playing a pivotal organisational, technical and political role in the nation's Pokhran-II nuclear tests in 1998. Sourav Ganguly remembered the legend for his down-to-earth demeanour. 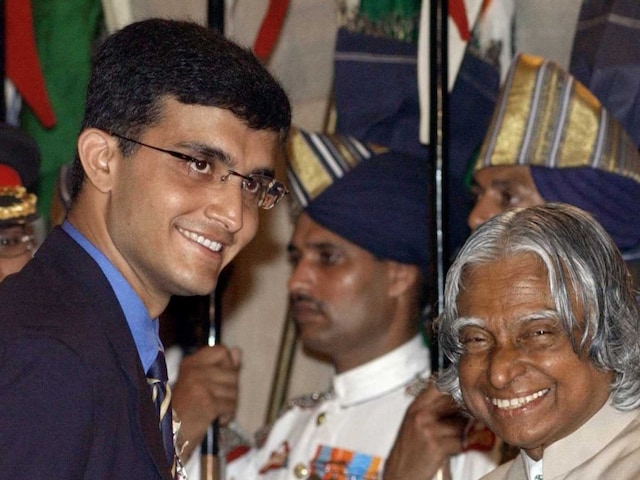 Condoling the death of Dr A.P.J. Abdul Kalam, ex-India cricket captain Sourav Ganguly on Wednesday recalled his meetings with the former President and said he was honoured to have received the Padma Shree from the great scientist.

The 11th President of India, Kalam served the nation in various capacities and was known as the 'Missile Man' after playing a pivotal organisational, technical and political role in the nation's Pokhran-II nuclear tests in 1998. Ganguly remembered the legend for his down-to-earth demeanour.

"I have put it (Kalam's picture with himself) on my WhatsApp. I think when we came back from the World Cup in 2003, we met him. I had the honour of having quite a few interactions with him. I got the Padma Shree from him (2004) and the moment you met the gentleman you could see that he was one of the most down-to-earth person," Ganguly told reporters during an Apollo Munich Health Insurance event for a 'Dengue Care' plan here.

"He died giving a lecture at IIM among the students. It's not just me, the entire country will remember him as someone who occupied the highest civilian post in the country and still be a normal person," he added.

Fondly recollecting instances of the team's interactions with the former president after finishing runners-up in the 2003 World Cup in South Africa, Ganguly said Kalam was a visionary.

"I remember he wished the team. I remember Anil Kumble asked him about his subject. He knew little about cricket and we tried to explain to him how 11 men move around a cricket ball. But whenever we met him we realised that his world and thinking was different. He has become the President of India but his thought process is different from the others," Ganguly said.

Kalam, 83, who died in Shillong on Monday will be laid to rest in his birthplace, Rameswaram, with full military honours.

Comments
Topics mentioned in this article
India Cricket Team Sourav Ganguly Cricket
Get the latest Cricket news, check out the India cricket schedule, Cricket live score . Like us on Facebook or follow us on Twitter for more sports updates. You can also download the NDTV Cricket app for Android or iOS.