Board of Control for Cricket in India (BCCI) president Sourav Ganguly, who is double vaccinated, was admitted to the hospital on late Monday evening after testing positive for COVID.

Board of Control for Cricket in India (BCCI) president Sourav Ganguly continues to be in stable condition, according to a statement released by Woodlands Hospital in Kolkata. He was hospitalised on Monday evening after testing positive for COVID.

"On the second day of admission, Sourav Ganguly, BCCI president and former India captain, is haemodynamically stable, afebrile and maintaining oxygen saturation of 99 per cent on room air. He slept well last night and has had breakfast and lunch.

"The medical board comprising Dr Saroj Mondal, Dr Saptarshi Basu and Dr Soutik Panda is keeping a close watch on his health status," the official release from the hospital stated.

The release was undersigned by Doctor Rupali Basu, MD and CEO of Woodlands. 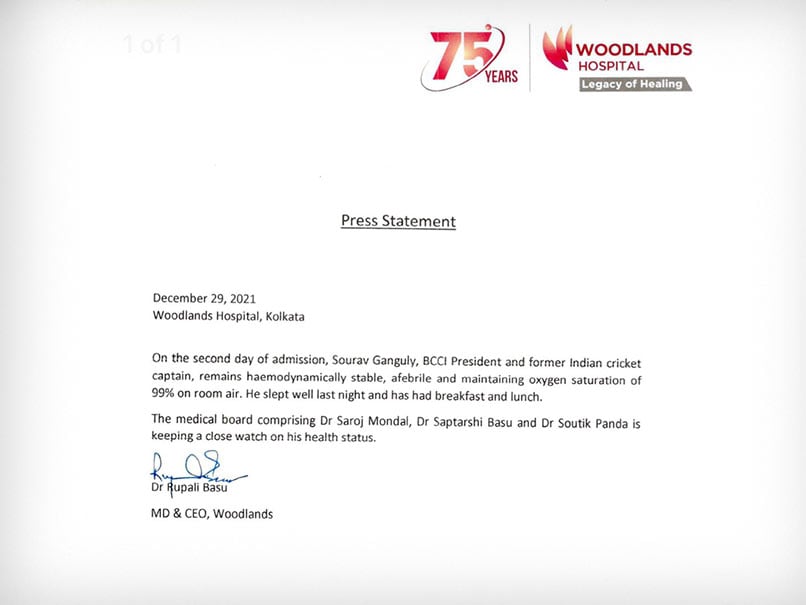 Ganguly, who is double vaccinated, was admitted to the hospital on late Monday evening, and a statement from the hospital said that the former cricketer was in stable condition. The doctors at the hospital informed NDTV that Ganguly's sample is being tested for the Omicron variant.

Ganguly was admitted to hospital twice earlier this year and underwent emergency angioplasty after having some cardiac issues.

Comments
Topics mentioned in this article
Sourav Ganguly BCCI Cricket
Get the latest updates on ICC Women's Cricket World Cup 2022 and IPL 2022, check out the Schedule , Live Score and IPL Points Table. Like us on Facebook or follow us on Twitter for more sports updates. You can also download the NDTV Cricket app for Android or iOS.