Team India ended the nation's long and arduous wait for a second 50-over World Championship crown on April 2, 2011, when Dhoni and his men beat Sri Lanka by 6 wickets in the final. 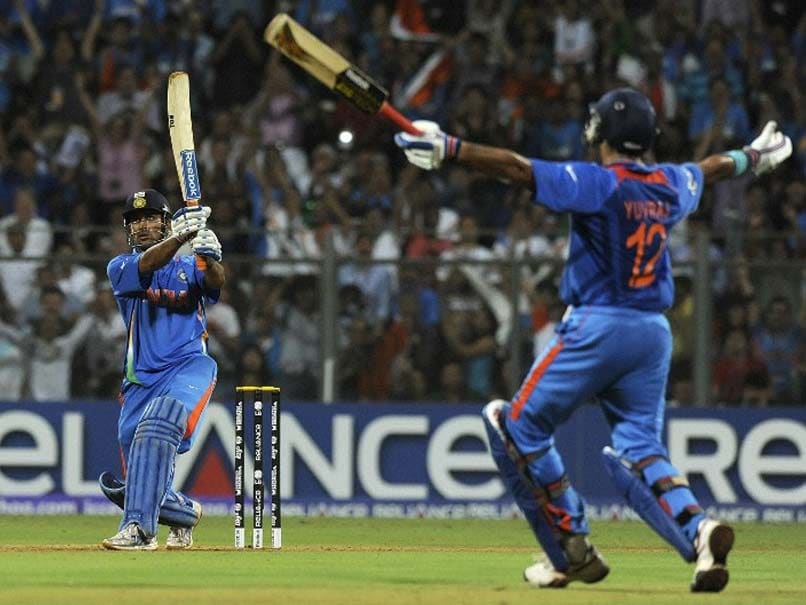 Dhoni remained unbeaten on 91 off 79 balls in the final vs Sri Lanka.© AFP

In the last decade, Indian cricket has made tremendous progress on and off the field. From taking over world cricket administration to adapting to the T20 format like no other country, the Board of Control for Cricket in India and the national cricket team have notched up several firsts in the last ten years. However, winning the 50-over World Cup after 28 years in 2011 remains India's biggest cricketing achievement during this period.

Six years later, the Indian captain and then the vital cog in star studded team-- Virat Kohli shared a picture with the Indian flag around his shoulders and tweeted to relive the moment. Not only him, the players who were part of the squad --Virender Sehwag, Sachin Tendulkar, Harbhajan Singh revisited that historic night in Mumbai. Taking to Twitter, the former cricketers also joined to celebrate the sixth anniversary of India's 2011 World Cup win.

#OnThisDay, a billion hearts rejoiced as #TeamIndia ???? lifted the ICC #CWC, at the Wankhede Stadium. pic.twitter.com/1nniYQJx54

Like I always say, chase your dreams because dreams do come true, and this was one of those moments in my life when it happened. pic.twitter.com/oNWKsYr6sw

6 years ago #OnThisDay,Dhoni finished it off in style and we as a Team lived a dream & won the World Cup,the best memory for this generation pic.twitter.com/QQ9oVFEf4e

Team India ended the nation's long and arduous wait for a second 50-over World Championship crown on April 2, 2011, when Dhoni and his men beat Sri Lanka by 6 wickets in the final. Shortly after Dhoni had smashed a huge six into the dark Mumbai sky, sending the Wankhede Stadium into a frenzy, he and Yuvraj Singh arrived for the press briefing.

What a night it was at the Wankhede . Gautam Gambhir and MS Dhoni led india to an unforgettable victory and we won the World Cup at home. pic.twitter.com/YpBu4HDVBC

Dhoni sealed it with a six...six years ago, on this day, India reclaimed the World Cup after 28 long years. Memories for a lifetime. Proud. pic.twitter.com/TBvuiAboS0

#ThisDayThatYear - In 2011, "Dhoni finishes off in style. India lift the World Cup after 28 years" - in @RaviShastriOfc's immortal voice pic.twitter.com/Q61sLx10VA

Yuvraj threw up his hands and let off a loud whoop, embracing some of the journalists in the front row as the normally staid media persons joined in on the celebrations. What questions were asked in the press conference no one remembers, though it was by far one of the most memorable press briefings ever by Dhoni and Yuvi.

The pair just could not stop giggling. Dhoni did try to answer a few questions, but it would seem that the post-victory champagne was taking effect.

The match had begun with Sri Lanka definitely looking like putting up a fight, with Mahela Jayawardene scoring a fine hundred. India looked like they would be in a little bit of a problem, with Virender Sehwag going for a duck and Sachin Tendulkar contributing only 18.

But India found a saviour in Gautam Gambhir, whose 97 possibly won the match for the hosts. He had a good third-wicket partnership with Virat Kohli.

Dhoni then came in and carted the Sri Lankan bowlers around to score 91 not out off 79 balls and in Yuvraj Singh's company, carried India to a six-wicket victory.

Of all the things that Dhoni will be remembered for, that six is definitely the most lasting memory of all cricket followers who have followed and idolised him over the years.

Comments
Topics mentioned in this article
India Cricket Team Cricket MS Dhoni Virender Sehwag
Get the latest updates on ICC T20 Worldcup 2022 and CWG 2022 check out the Schedule, Live Score and Medals Tally. Like us on Facebook or follow us on Twitter for more sports updates. You can also download the NDTV Cricket app for Android or iOS.