Australian Jamie Siddons, tipped to take over as Wellington coach, is not excited at the prospect of Sri Lakan spin wizard Muttiah Muralitharan joining Wellington Firebirds as their overseas player. 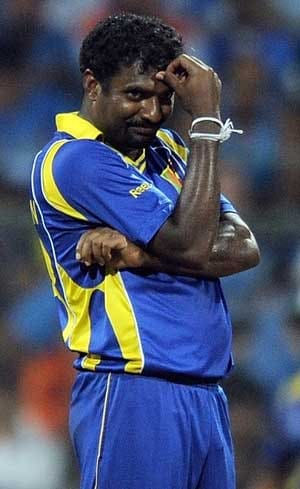 Australian Jamie Siddons, tipped to take over as Wellington coach, is not excited at the prospect of Sri Lakan spin wizard Muttiah Muralitharan joining Wellington Firebirds as their overseas player.

Muralitharan was signed Friday, a day after Siddons was interviewed for the vacant Firebirds coaching job.

Asked about Muralitharan's signing, Siddons said: "That's good ... well, I hope it's good. I'll have to think that one through. I probably have some thoughts but I don't want to discuss them."

Siddons, who was in charge of Bangladesh during the World Cup, was quoted as saying by Stuff.co.nz. that it would have been nice if the coach had some say in signing overseas players.

"It wouldn't put me off the job but it would be nice to be in the job and have some say in those types of appointments, for sure."

Cricket Wellington chief executive Gavin Larsen said that signing of the world's record wicket-taker before the coach was not an issue.

"I certainly hope not. I wouldn't like to think that any new coach would balk at Murali's name," Larsen was quoted as saying.

"He was very affordable and comparable to what the other key overseas players have received in New Zealand. We haven't paid above the odds. He's a really good bloke and he loves New Zealand. He'll bring his family out and he's really keen from a lifestyle point of view, and keen to contribute on and off the park," he added.

Comments
Topics mentioned in this article
Cricket James Darren Siddons Jesse Ryder Muttiah Muralidaran Otago Volts
Get the latest updates on ICC Women's Cricket World Cup 2022 and IPL 2022, check out the Schedule , Live Score and IPL Points Table. Like us on Facebook or follow us on Twitter for more sports updates. You can also download the NDTV Cricket app for Android or iOS.