Off-spinner Shane Shillingford was reported for a suspect action during West Indies' tour of India and was later banned from bowling in international cricket based on reports by an independent biomechanical analysis. 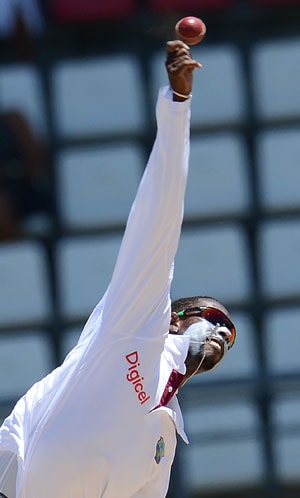 The International Cricket Council (ICC) announced late Monday that Shillingford had been banned indefinitely after an independent biomechanical analysis showed his action was illegal.

The tests also found Shillingford's team-mate, Marlon Samuels, was delivering an illegal quicker ball, although his standard off-break delivery was within the rules.

Gibson said he was surprised at the results of the tests, which were carried out in Australia after the pair were reported during their team's second Test against India in Mumbai last month.

"Though I felt confident about the way the two players performed at the testing, the report did not come back in our favour," he said.

"Shane is obviously gutted, but Marlon's role in the team, as I have said previously, is primarily as a batsman, so the impact on him is a little bit less."

Gibson said the West Indies would work on a rehabilitation plan

"...so Shane can continue his international career in the shortest possible time and Marlon can continue to contribute with the ball when he's required".

"They are both tough characters and have had their share of ups and downs in the game over the years. We have no doubt that they will emerge from this latest setback with the utmost confidence," he added.

Both players have previously been banned from bowling because of illegal actions. Samuels did not bowl for three years after first being reported in 2008, while Shillingford was banned in 2010 and returned a year later after undergoing remedial work on his action.

Shillingford, 30, has been one of the best bowlers for the West Indies in the first two Tests against New Zealand, taking six wickets at 42.66. He will miss the third and final Test beginning in Hamilton on Thursday, when the tourists will attempt to come back from a 1-0 deficit.

Comments
Topics mentioned in this article
Cricket Bangladesh Cricket Team Shane Shillingford Gary Kirsten Ravi Rampaul MS Dhoni Marlon Samuels Ottis Delroy Gibson
Get the latest updates on IND vs NZ 2021, check out the Schedule and Live Score . Like us on Facebook or follow us on Twitter for more sports updates. You can also download the NDTV Cricket app for Android or iOS.