Sports Minister Jitendra Singh is looking forward to work with Sachin Tendulkar and has plans to organise a function in honour of the Master Blaster, who is retiring from international cricket next month. 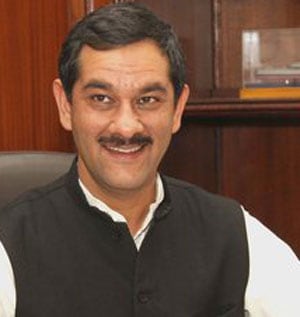 Sports Minister Jitendra Singh on Thursday expressed his desire to organise a felicitation function in honour of Sachin Tendulkar and hoped that the legendary batsman will work with the ministry in future to promote sports in the country.

"I look forward to Sachin Tendulkar working with the Ministry of Youth Affairs and Sports to promote sports in this country. But for that modalities need to be discussed," said Jitendra in New Delhi on Thursday.

"He is an icon for this country, for the youth of this country. I am also a huge fan of him myself. We are also planning some sort of an award and felicitation programme for him," he added.

Asked if he would be going to Mumbai to watch the veteran play his last international match, Jitendra said, "I hope so."

The minister, however, insisted that he would not like to term Tendulkar's last Test as a farewell.

"I won't call it a farewell. It is a new start for him. He will be able to motivate a lot of young people in this country to come and play, and bring laurels to India," said Jitendra at the sidelines of a function to felicitate the Junior Men's hockey team for winning the 3rd Sultan Johar Cup recently.

The 40-year-old Tendulkar last week announced his decision to retire from Test cricket after playing his landmark 200th match, which is scheduled to be held in Mumbai against the West Indies.