Champion athlete Milkha Singh feels that Sachin Tendulkar's name may get maligned if he dabbles into politics. 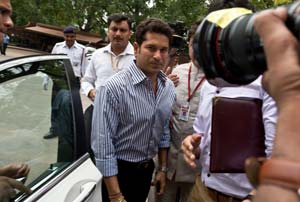 Sachin Tendulkar has received some advice from another legend, 'Flying Sikh' Milkha Singh: Stay away from politics. Your name will be besmirched.

"I think Sachin should not get into politics. The name he has earned for himself, people will malign it. The government has respected him, the entire country respects him. He has got the Bharat Ratna, it is a huge achievement," Milkha said here on Saturday.

Last year, Tendulkar was nominated to the Rajya Sabha along with Bollywood actor Rekha and businesswoman Anu Aga.

Moments after Tendulkar retired from international cricket Saturday in Mumbai, he was named for India's highest civilian award, Bharat the Ratna. He is the first sportsperson and the youngest to get the honour.

"I have met Sachin several times. He is a very respectful man. Every time he meets me, he touches my feet. He is a very good and humble human being," said Milkha.

Comments
Topics mentioned in this article
Cricket Amtitsar Govindsingh Milkha Singh Sachin Ramesh Tendulkar
Get the latest updates on IPL 2020, check out the IPL Schedule for 2020 and Indian Premier League (IPL) Cricket live score . Like us on Facebook or follow us on Twitter for more sports updates. You can also download the NDTV Cricket app for Android or iOS.