Sachin Tendulkar asked his fans for their decision as umpire after a ball hit the stumps but the bail jumped up, and fell back on a stump and remained teetering there. 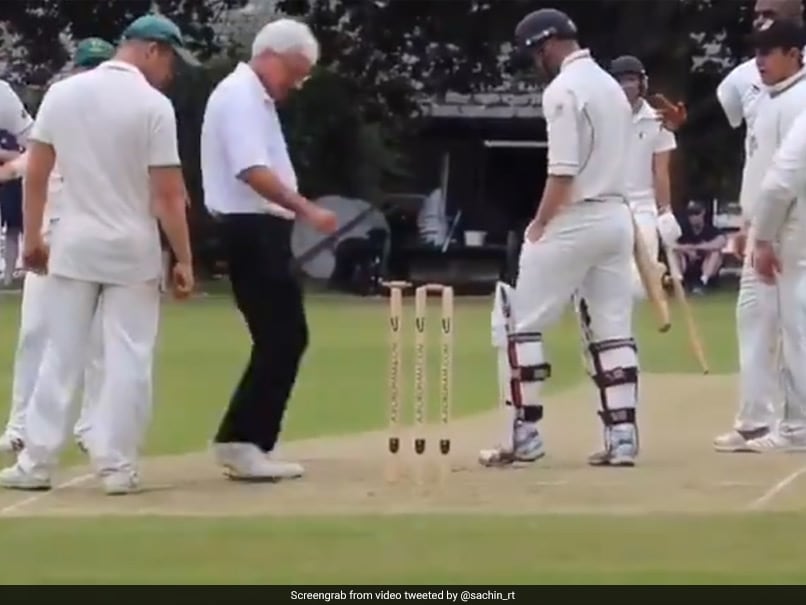 The batsman was adjudged not out after the ball hit the stump but didn't dislodge the bail.© Twitter

Sachin Tendulkar provided a teaser for cricket fans after he asked for their decision as umpires with a video of batsmen being adjudged not out after the ball hit the stump but the bail, after jumping up, came down and stayed teetering on top of one stump. "A friend shared this video with me. Found it very unusual! What would your decision be if you were the umpire?" Sachin Tendulkar, regarded as one of the greatest batsmen in the world, captioned the video on Twitter.

A friend shared this video with me.
Found it very unusual!
What would your decision be if you were the umpire? pic.twitter.com/tJCtykEDL9

Along with the sympathy for the unlucky bowler, some fans came up with humorous replies to Tendulkar's tweet.

"Batsman arrested but released on bail," a user said on Twitter.

Batsman arrested but released on bail.

The bail has been dislodged so it should have been given out, idk why umpires didn't give it out

Some fans brought Sri Lankan umpire Kumar Dharmasena into the matter for an "error" during the World Cup 2019 final and made hilarious memes out of it.

"He know how to handle such situations," a user said, while other joined in, saying: "Out if Bowler has scored more fours."

His decision will be final https://t.co/2i900zrwNa

He know how to handle such situations,,, pic.twitter.com/4TYJr2szTV

This guy literally screwed NZ team by his decision

If dharmasena was there it definitely out

If simon taufel was there it definitely not out!!#ICCRules

According to a media report, Dharmasena admitted he made an "error" and should have given one run fewer in the final over of the deciding match at Lord's.

A throw to the stumps deflected off the bat of a diving Ben Stokes as he tried to complete a second run and raced to the boundary, with Dharmasena awarding six runs.

Three balls later the scores at 50 overs were tied as England reached 241 all out replying to New Zealand's 241/8.

It took the nail-biting final to a Super Over which again was tied but England lifted the trophy by virtue of having scored more boundaries.

Former Sri Lankan Test player Dharmasena told the Sunday Times he did not have the benefit of television replays which showed the batsmen had not crossed.

"I agree that there was an error of judgement when I see it on TV replays now," Dharmasena, who was umpiring the final with South Africa's Marais Erasmus, told the local Sunday Times.

"But we did not have the luxury of TV replays at the ground and I do not regret the decision I made."

Dharmasena said he signalled six after consulting the other match officials.

Sachin Tendulkar Kumar Dharmasena World Cup 2019 Cricket
Get the latest updates on IPL Auction 2023 and check out  IPL 2023 and Live Cricket Score. Like us on Facebook or follow us on Twitter for more sports updates. You can also download the NDTV Cricket app for Android or iOS.