"Nothing Can Be Better": Rohit Sharma Posts Adorable Anniversary Wish For Ritika Sajdeh 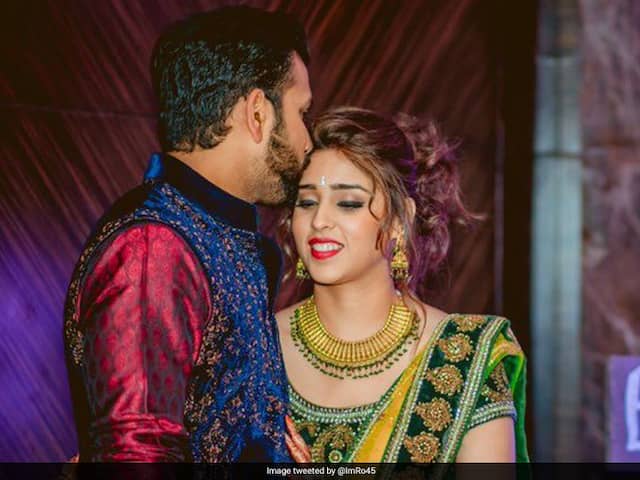 Rohit Sharma tweeted a photo with Ritika Sajdeh on his fourth anniversary.© Twitter

Rohit Sharma tweeted a loving message for his wife Ritika Sajdeh along with a photo of the two of them on their fourth marriage anniversary. "Can't imagine my life moving forward without you," the India opener tweeted. "Nothing can be better than this. I love you," he added along with a coupe of emojis. Rohit Sharma had married Ritika Sajdeh in 2015 after dating her for nearly six years. They have a daughter together who is yet to turn a year old.

Can't imagine my life moving forward without you. Nothing can be better than this. I love you @ritssajdeh pic.twitter.com/RIHcWqoL48

Fans were left gushing after Rohit's sweet message for Ritika.

"Happy anniversary both of you," wrote a fan.

"You two are the perfect real life definition of soulmates. I hope you continue to share the love and laughter together for many more years to come. Happy Anniversary to both of you!" another user tweeted.

"Awwww so cute," a user tweeted.

"Happy anniversary my hero," another tweeted.

"Love you both," another wrote.

Rohit Sharma has been in fine form on the field for India and has enjoyed a good year. He led the Mumbai Indians to the IPL trophy before dominating in the World Cup. He finished the tournament as top scorer with 516 runs.

His Test career got a reboot, being given a chance to open in the longest format. Rohit took the chance with both hands, scoring twin tons in his first match and then following it up with his first Test double-century.

He was also in sublime form in T20 Internationals and is currently the joint-highest run-scorer in the format along with Virat Kohli.