Rohit Sharma posted an adorable photograph on Instagram with his daughter Samaira. 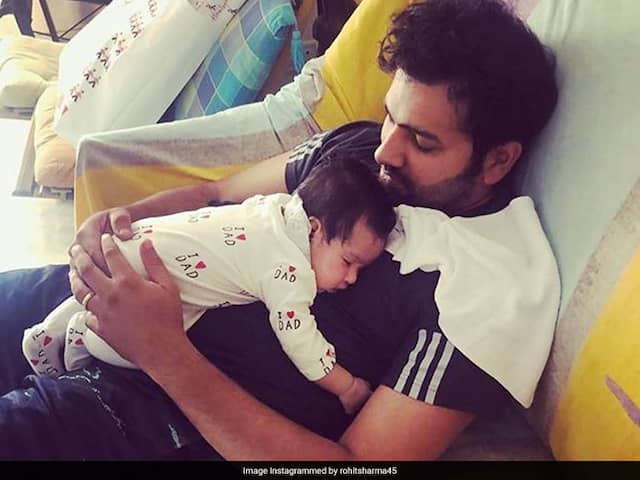 Rohit Sharma became the father of a baby girl on December 31.© Instagram

Rohit Sharma is back to his daughter Samaira after a hectic tour of New Zealand, where India clinched the One-day International series 4-1 but lost the T20I series 1-2. Rohit Sharma took to Instagram to post an image, where he can be seen taking a sound nap with daughter Samaira. The image is inviting several reactions by fans and users. "This is special, so good to be back," he wrote. Rohit is expected to go join the Indian team in the home series versus Australia, which starts February 24.

This is special, so good to be back

The Indian cricket team selectors will meet on Friday to pick the squad for the five-match One-day International (ODI) series against Australia, with the players' workload in perspective ahead of the ICC World Cup 2019, to be hosted by England from 30 May to 14 July 2019.

India have won the World Cup twice in 44 years, with the last one in 2011 under the captaincy of MS Dhoni. After eight years, 37-year-old wicket-keeper Dhoni will be under the spotlight if he manages to secure a place in the Virat Kohli-led squad for World Cup.

Workload management of the stars will be on top of the mind when the selectors meet in Mumbai to pick the squad for the white ball series against Australia.

The Indian team is set to play two T20Is and five ODIs against the Aussies in what is set to be the last set of international games that the boys get before going into the 2019 World Cup in England, starting on May 30. The only practice they will get after this is in the Indian Premier League.

The selection committee will look at keeping the right balance as they would not only wish to give the senior guys ample rest before going into the showpiece event, but also wouldn't want to give the Australians the upper hand in what will be the last series before the World Cup. India has been playing incessantly overseas and the fast bowling wolf pack has had no real rest.