Ravichandran Ashwin and Herschelle Gibbs were involved in an exchange which eventually turned sour.

Indian spinner Ravichandran Ashwin and former South African cricketer Herschelle Gibbs were involved in an exchange which eventually turned sour on Monday. It all began with a tweet that Ashwin posted about a sports shoe brand. It was then, Gibbs jokingly replied on his post saying that those shoes would help him run a bit faster. However, Gibbs' reply didn't go down well with the Indian spinner and he made a veiled attack on the former Proteas cricketer's infamous match-fixing saga in 2000, later deleting the tweet.

"Surely not as fast you did mate, unfortunately, I wasn't as blessed as you were. But I was blessed with a wonderfully ethical mind not to fix games which put food on my plate", Ashwin had replied. 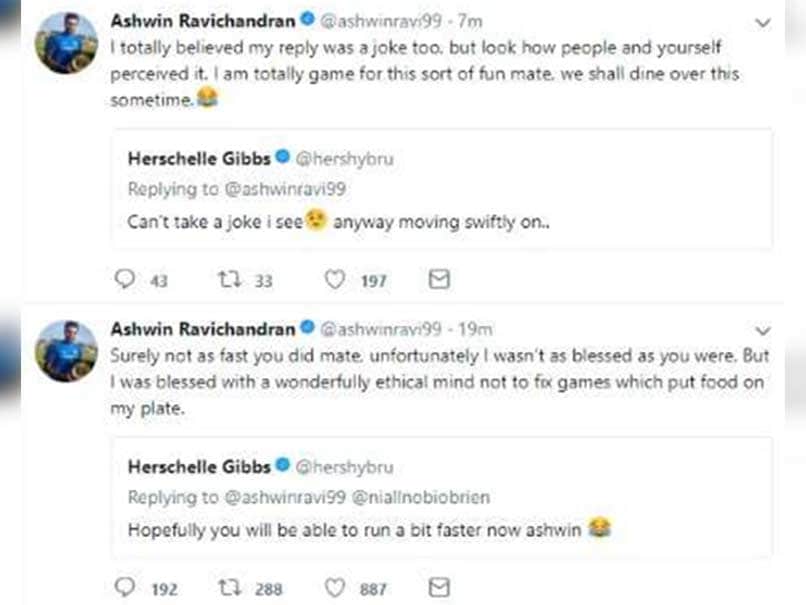 In order to not escalate the matter further, Ashwin subsequently tried to play it down by inviting Gibbs for a dinner.

"I totally believed my reply was a joke too, but look how people and yourself perceived it. I am totally game for this sort of fun mate, we shall dine over this sometime", Ashwin replied.

Can't take a joke i see anyway moving swiftly on..

I totally believed my reply was a joke too, but look how people and yourself perceived it. I am totally game for this sort of fun mate, we shall dine over this sometime.https://t.co/Z7YdXQnxeD

The online exchange between Ashwin and Gibbs received mixed responses from Twiterrati.

CSK was also banned for fixing MR Ashwin and u were part of that team. We shall diner over this too sometime v soon

Man, even Rahul Dravid wasn't this good at defense

Don't try to dig it even deeper now. Your last reply was below the belt and inappropriate mate. Didn't expect that from u and now just because u say it was a joke, it doesn't work that way. After shooting someone u say that was a joke? Learn to embrace a mistake too.

Seeing the matter escalate, Ashwin deleted the 'fixing' tweet and gave his reasons for doing so.

In 2000, after South Africa toured India the same year, Delhi Police had charged Hansie Cronje for fixing his team's ODIs for money on April 7 that year. Initially, Cronje denied the allegations but on April 11, he confessed to his involvement in the activities and later on June 8, Gibbs admitted on accepting offer from his captain Cronje to make less than 20 runs in a match in return of $15,000. It is said that it was the fourth ODI in which Gibbs was asked to under-perform but he went on to make 72 and still they lost that match. After this, Gibbs was banned for the remaining year from international cricket.

Comments
Topics mentioned in this article Ravichandran Ashwin Herschelle Gibbs Cricket
Get the latest Indian Premier League 2020 news, check out the IPL 2020 schedule, Cricket live score . Like us on Facebook or follow us on Twitter for more IPL 2020 updates. You can also download the NDTV Cricket app for Android or iOS.
Highlights
Related Articles