Yusuf Pathan Refuses To Walk Off After Umpire Rules Him Out

Ranji Trophy: Yusuf Pathan refused to walk off the field after being given out by the on-field umpire against Mumbai in Vadodara. 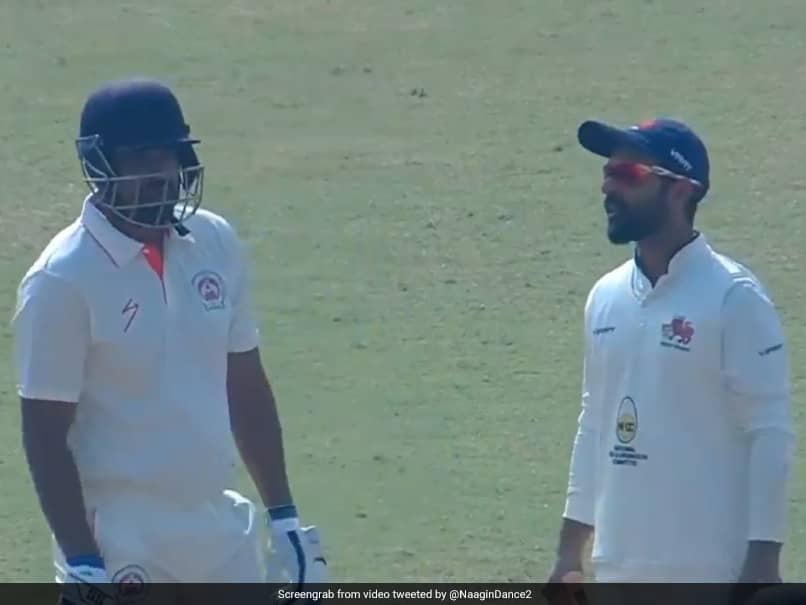 Ranji Trophy: Yusuf Pathan walked off after having a little chat with Ajinkya Rahane.© Twitter

Mumbai started their Ranji Trophy campaign with a comfortable 309-run win over Baroda on the last day of the their Round 1 match at Vadodara's Reliance Stadium on Thursday. Chasing a huge target of 534 runs, Baroda were bundled out for  224 runs in their second innings, suffering a humiliating loss. On a day when Baroda batsmen stumbled badly, Yusuf Pathan refused to walk off the field after being given out by the on-field umpire. The incident occurred in Baroda's second innings when Shashank Attarde came into bowl in the 48th over, replacing Akash Parkar. Attarde drew a forward defensive shot from Yusuf Pathan on the second ball of the over which went straight to the forward short leg fielder Jay Gokul Bista.

The umpire took his time but in the end raised his finger, ruling Pathan out. However, the 37-year-old batsman refused to walk off the field and held his ground for almost a minute, waving his hands towards the umpire in disappointment.

It took a lot of convincing from Mumbai's senior player Ajinkya Rahane for Pathan to walk back. However, his long way back to the pavillion was filled with shaking of head all the while.

The win gave Mumbai all six points, while Baroda are point-less after their season opener.

Meanwhile in the other game, Karnataka once again came up trump against Tamil Nadu in their first match of the premier domestic tournament as they beat them by 26 runs in a thrilling encounter.

Chasing 180 runs to win, Tamil Nadu were reduced to 154 runs in their run chase.

After a strong position at Tea, Tamil Nadu stumbled in the final session and eventually lost their final wicket on the third last ball of the day.

After this win, Karnataka have beaten Tamil Nadu in all three domestic competitions this year.

Prior to this game, Karnataka had beaten Tamil Nadu in the final of Vijay Hazare Trophy and Syed Mushtaq Ali Trophy to successfully defend both the domestic titles.

Ajinkya Rahane Akash Parkar Jay Bista Reliance Stadium, Vadodara Cricket
Get the latest updates on IPL 2021, IPL Points Table , IPL Schedule 2021 , live score . Like us on Facebook or follow us on Twitter for more sports updates. You can also download the NDTV Cricket app for Android or iOS.