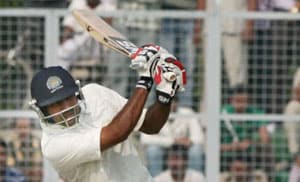 Sunny Singh struck a double hundred, while two other batsmen notched up centuries each to enable Haryana raise a mammoth 573 for six declared on the second day of their Group A Ranji Trophy match against Gujarat here on Sunday.

In reply to Haryana's massive first innings total, Gujarat were 27 for one at stumps with opener Samit Gohel unbeaten on 13 and Rush Kalaria on seven.

While Sunny resumed on 139, Rana took the crease at 51 not out. The two overnight batsmen simply dominated the proceedings as they put on a solid 194-run stand for the third wicket.

It took Gujarat 29 overs before they could taste success, with Rana departing after hitting his sixth first-class ton. His innings came off 200 balls with 14 boundaries.

Sunny followed 11 overs later, soon after getting to 201 that came from 318 deliveries with 26 fours and two sixes, with Kalaria picking up his wicket. Kalaria then dismissed Yatharth Tomar in the next ball to be on a hat-trick.

Nitin Saini, however, coupled with Amit Mishra (61) to produce a 166-run stand for the sixth wicket.

After declaration, Haryana bowler Harshal Patel removed opener Priyank Panchal for a duck in the second over.

Comments
Topics mentioned in this article
Cricket Irfan Pathan Sunny Singh Wasim Jaffer Virat Kohli Vikram Solanki Paul Valthaty HAR
Get the latest Cricket news, check out the India cricket schedule, Cricket live score . Like us on Facebook or follow us on Twitter for more sports updates. You can also download the NDTV Cricket app for Android or iOS.