Crisis man Siddhesh Lad batted stubbornly in making a patient, unconquered 71 to bail out oft-crowned champions Mumbai against Baroda in their landmark 500th Ranji Trophy Group C game that was drawn on Sunday. 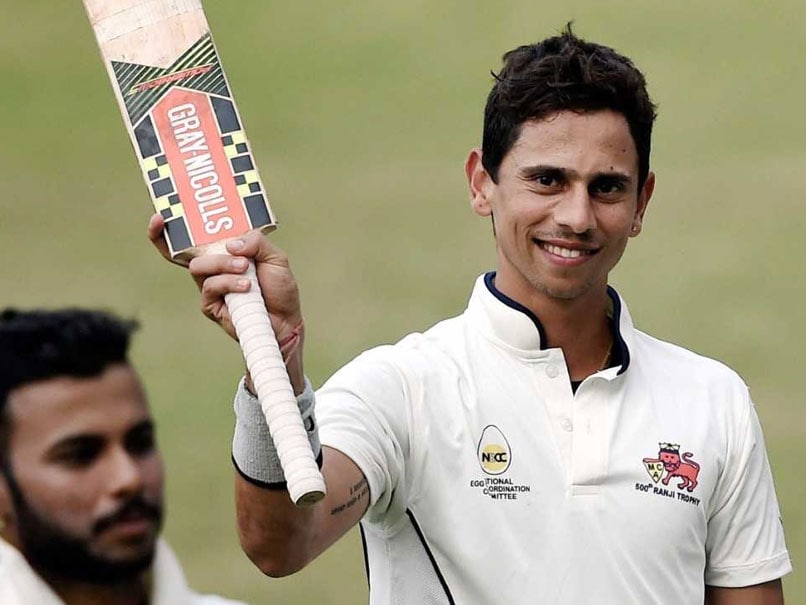 Siddhesh Lad scored an unbeaten 71 to bail out Mumbai against Baroda.© PTI

Crisis man Siddhesh Lad batted stubbornly in making a patient, unconquered 71 to bail out oft-crowned champions Mumbai against Baroda in theirlandmark 500th Ranji Trophy Group C game that was drawn on Sunday. The short-statured batsman remained unbeaten after staying at the crease for two minutes over five hours and facing 238 balls in the Mumbai second innings score of 260 for 7 at the Wankhede Stadium. The 25-year-old batsman, known for his obdurate measures, stitched together a partnership of 79 runs with Suryakumar Yadav (44) for the sixth wicket to help Mumbai to a tea-time score of 237 for 6 after the 41-time champions commenced at 102 for 4.

Lad, on 57 in a score of 236 was caught off Swapnil Singh but was fortunate to escape as it was found to be a no-ball through a referral to the third umpire.

Lad, who struck 7 fours, later got involved in another half century stand with the stonewalling Abhishek Nayar (8) for the seventh wicket to take Mumbai closer to safety after they commenced the last day facing an innings defeat, having conceded a huge first innings lead of 404 to the visitors on Saturday.

Nayar concentrated only in blocking with a string of fielders around the bat for 141 minutes as he faced 108 balls during his 50-run partnership with Lad.

The left handed batsman departed with eleven overs still remaining in the game, edging a ball that spun away from debutant off spinner Kartik Kakade that took the edge and was caught at the wicket.

But Lad, who had scored 117 in the previous away game against Odisha, and Dhawal Kulkarni (8 not out) held on in determined fashion to force a draw after being together for 46 minutes.

The hosts lost overnight not out batsman and Test stalwart Ajinkya Rahane in the morning soon after the first drinks break for 45, the batsman losing his concentration and getting out to an attempted cut shot to left-arm spinner Swapnil Singh.

Yadav too was out in a similar fashion off rival captain Deepak Hooda after batting diligently for 203 minutes in the company of Lad.

Baroda took the new ball before tea after 83 overs, but the pace bowlers could not do the trick as in the first innings and it was left to the spinners to get breakthroughs on a track where the ball had started to turn appreciably.

They tried their best with a host of fielders around the bat but Mumbai escaped the noose, in large measure due to Lad's highly responsible knock.

Spinners Swapnil (2 for 55), who had scored 164 in the Baroda innings, and Kakade (2 for 50) were the main wicket takers in the Mumbai second innings.

With one point from the drawn game, Mumbai took their tally to 11 with two games in hand while Baroda took theirs to 7, with the same number of matches left to play.

Comments
Topics mentioned in this article
India Cricket Team Siddhesh Lad Suryakumar Yadav Abhishek Nayar Cricket
Get the latest updates on IND vs NZ 2021, check out the Schedule and Live Score . Like us on Facebook or follow us on Twitter for more sports updates. You can also download the NDTV Cricket app for Android or iOS.