Shikhar Dhawan's experience came into play as he kept one end under control but lacked support from the other end before he shared a brief 84-run partnership for the fifth wicket to take Delhi past the 200-run mark with Anuj Rawat (29). 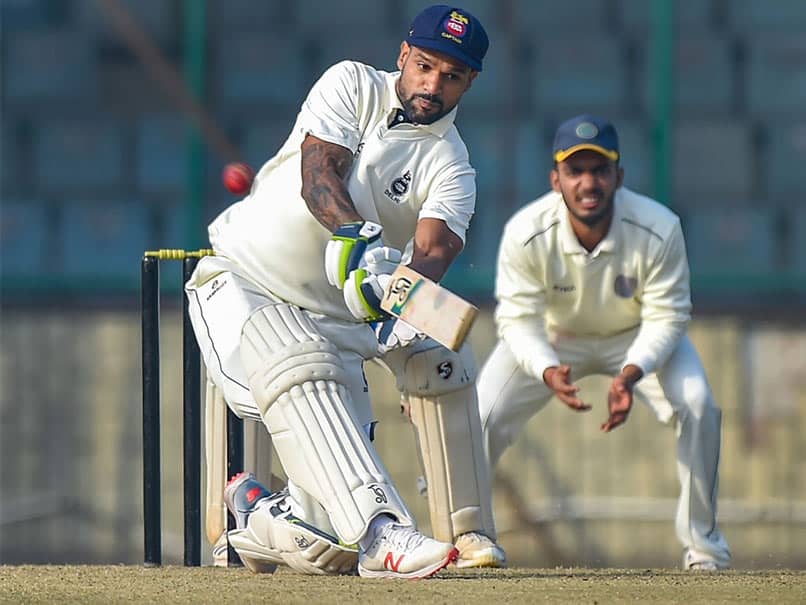 An unbeaten 137-run knock by India's limited-over opener Shikhar Dhawan powered Delhi to 269/6 against Hyderabad in a Ranji Trophy Round 3 contest at the Arun Jaitley Stadium in New Delhi even as some spirited bowling by the visitors saw the other batters failing to leave a mark. Put into bat, hosts Delhi were jolted at regular intervals. However, Dhawan's experience came into play as he kept one end under control but lacked support from the other end before he shared a brief 84-run partnership for the fifth wicket to take Delhi past the 200-run mark with Anuj Rawat (29). For the visitors, Mehdi Hassan and Mohammed Siraj picked up three and two wickets respectively.

A similar type of story was witnessed at the Eden Garden as hosts Bengal rode opener Abhishek Raman's unbeaten 110 followed by Manoj Tiwary's 46-run contribution to end the first day at 241/4 against Andhra, for which Cheepurapalli Stephen bagged a couple of wickets while Shoaib Md Khan and Yarra Prithviraj settled for one each.

In Mysore, Karnataka's decision to bat backfired as the hosts were bundled out for a paltry 166 runs, thanks to Himachal Pradesh's Kanwar Abhinay Singh (5/37) fifer. Skipper Karun Nair was the only one to put up a fight for the home side with a gritty 81-run knock.

In return, Himachal were 29/3 at stumps.

Hosts Gujarat took a 58-run lead against Kerala in Surat as after managing a first innings total of 127 runs, they rode Roosh Kalaria (4/20) and Axar Patel's (3/11) magnificent bowling effort to wrap up the visitors for just 70 runs. Gujarat were later 1/0 at the close of play.

Ishwar Pandey's (6/26) stunning bowling figures helped Madhya Pradesh bundle out Tamil Nadu for just 149 runs in Indore following which the hosts were 56/3 and were trailing by 93 runs at stumps on Day 1.

Another sensational bowling effort by Pradeep T (6/37) saw Mumbai, the most successful team in Ranji Trophy history, being bowled out for a paltry 114 runs. Skipper Suryakumar Yadav was the top scorer for Mumbai with 39 runs before the Railways ended the day at 116/5. Arindam Ghosh and Karn Sharma were batting at 52 and 24 runs respectively at close of play in Mumbai.

A valiant top-order contribution guided Saurashtra to 322/8 against Uttar Pradesh in Rajkot. For the visitors, skipper Saurabh Kumar was the pick of the bowlers with figures of 4/79 while Zeeshan Ansari picked up three for 125 runs.

Hosts Odisha were 98/3 to trail by 19 runs against Uttarakhand at stumps in Cuttack. Earlier, Basant Mohanty's sparkling 6/17 had helped the hosts bowl out their opponents for 117 runs.

Services' Diwesh Pathania (5/36) fifer saw Tripura succumbing at 126 runs at the Palam Ground in Delhi. Nirupam Sen was the top scorer for Tripura with his 54-run contribution while all other batters failed to impress. In return, Services ended the day at 23/2.

Some valiant top-order contribution saw Haryana reaching 274/6 at close of play against hosts Jharkhand in Jamshedpur. Ashish Kumar, Shahbaz Nadeem and Anukul Roy picked up two wickets each for Jharkhand.

Only 18 overs of play was possible in Jammu as bad light forced an early close of the first day when Jammu and Kashmir were 59/1 against Assam as opener Ahmed Banday chipped in with 31 runs before falling while Suryansh Raina and Shubham Khajuria were batting on 15 and 10 runs respectively.

Paras Dogra and Arun Karthik's unbeaten 135 and 86-run knock saw Puducherry reaching 286-3 at stumps as they took a healthy 213-run lead against Mizoram, who were bowled out for just 73 runs in their first essay, thanks to a collective bowling effort by Sagar Udeshi (4/6), Vinay Kumar (3/25) and Sagar Trivedi (2/17) in Kolkata.

Iqbal Abdulla's 94 runs alongwith some middle-order contributions saw Sikkim posting 269 runs in their first innings. In return, Nagaland were 45/1 at close of play and are still 224 run behind their opponents.

A disciplined bowling show by the Arunachal Pradesh bowlers saw the entire Manipur team back in the hut after managing just 196 runs. Arunachal were 10 for no loss at stumps in Dibrugarh.