Bengal qualified for the semi-finals by virtue of their first innings lead over Odisha while Karnataka thrashed Jammu and Kashmir. 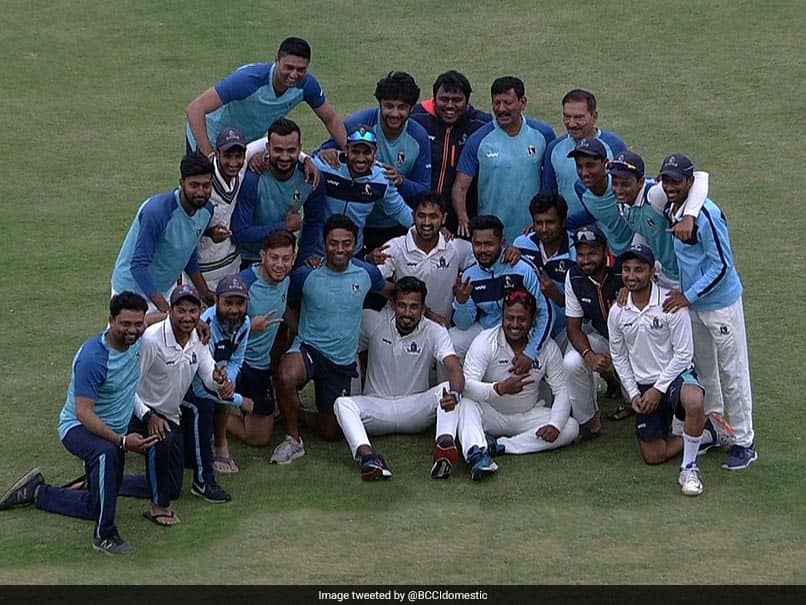 Bengal will face Karnataka while Saurashtra will take on Gujarat in the Ranji Trophy semi-finals.© Twitter

Bengal stormed into the Ranji Trophy semi-finals by virtue of their first innings lead over Odisha while Karnataka thrashed Jammu and Kashmir to set up a semi-final date with the former after the final day's play on Monday. Resuming on 361/7, Bengal lost their remaining three wickets for just 12 runs inside six overs to set Odisha an improbable 456-run target. Odisha were 39/0 in 10 overs when bad light stopped play as both the teams agreed upon a stalemate at the DRIEMS College ground.

Bengal qualified by virtue of their first innings lead of 82 runs, and will take on Karnataka in the semi-final starting from February 29 at Eden Gardens in Kolkata.

Meanwhile, Karnataka rode Krishnappa Gowtham's 7/54 to bundle out Jammu and Kashmir for 163 and qualify for the semis.

Karnataka ended the day at 245/4, leading Jammu and Kashmir by 259 runs and on Monday were all out for 316. K.V. Siddharth was their top-scorer with 98. It was Gowtham's show then as the off-spinner spun a web around J&K batters.

In the fourth quarter-final at Ongole, Saurashtra won by virtue of their first innings lead after their tie with Andhra ended in a draw. Saurashtra had ended the fourth day at 375/9, extending their overall lead to 658 runs and on the fifth day, they were all out for 426. Wicketkeeper K.S. Bharat was on 55 along with Karan Shinde (27 batting) when the teams decided to call the match a tie.

Saurashtra will take on Gujarat who had already qualified for the semis, at Rajkot from February 29. Gujarat beat Goa and became the first team to reach the semifinals on Sunday.

Comments
Topics mentioned in this article
Krishnappa Gowtham Cricket
Get the latest updates on India vs Australia Series, check out the India vs Australia Schedule for 2020-21 and Ind vs Aus live score . Like us on Facebook or follow us on Twitter for more sports updates. You can also download the NDTV Cricket app for Android or iOS.