With UP already taking 114 runs first innings lead and just one full day's play remaining, the match is heading for a tame draw. 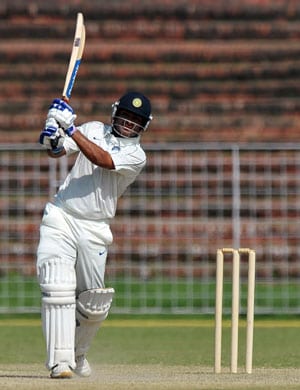 Piyush Chawla led from the front with an unbeaten century to give Uttar Pradesh the crucial first innings lead over Tamil Nadu at the end of the third and penultimate day's play in a Group B match of the Ranji Trophy, here on Saturday.

Leg-spinner Chawla showcased his batting abilities during his 114-run unconquered knock and together with wicket-keeper Eklavya Dwivedi (70) added 97 vital runs for the seventh wicket to bail UP out from trouble.

Chawla, who got a reprieve on 9 when Abhinav Mukund put down a fairly straightforward chance at point, laced his 236-ball knock with 12 boundaries and three huge sixes, while Dwivedi struck 10 fours and one six during his 174-ball stay.

At stumps, Amit Mishra (30) was the other not out batsman along with Chawla and the duo is still going strong after having already shared 109 runs for the eighth wicket.

With UP already taking 114 runs first innings lead and just one full day's play remaining, the match is heading for a tame draw.

Earlier resuming at the overnight score of 171 for five, Prashant Gupta (73) managed to add only 18 runs to his score before he was cleaned up by left-arm orthodox bowler R Aushik Srinivas (3/123).

Tamil Nadu bowling attack looked listless on Saturday as they managed to pick up just two wickets in the form of Gupta and Dwivedi in the entire 90 overs.

Baba Aparajith, who dismissed Dwivedi, was the other wicket taking bowler for Tamil Nadu.