Ranji Trophy: Jaydev Unadkat led his side from front as he picked up 12 wickets in the match, six each in both innings, helping Saurashtra beat Baroda by four wickets. 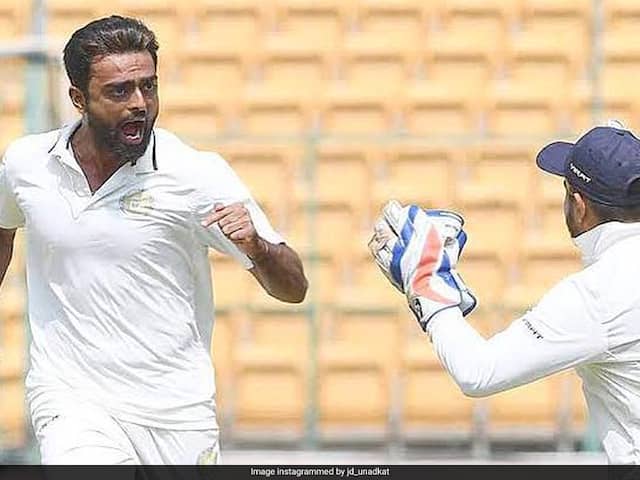 Jaydev Unadkat picked up six wickets in both the innings as Saurashtra held their nerve to win by four wickets against Baroda in a Group B Elite Ranji Trophy game in Vadodara on Wednesday. Saurashtra had 200 to chase down and were on the mat at 113/6 but Aarpit Vasavada and Prerak Mankad got together and added 87 runs to take Saurashtra over the line. Vasavada made 48 not out, while Mankad finished with an unbeaten 36. The outright win strengthens this position as far as quarter-finals qualification goes. In six games, they have 25 points with three wins.

Meanwhile, in a Group A game, Gujarat need 105 more to win against Vidarbha in Surat.

At 104/6, Vidarbha were down in the dumps, leading by just 36. Then, they were lifted by a seventh-wicket partnership of 82 between Akshay Wadkar and Aditya Sarvate to help swell their lead. Wadkar top scored with 87.

At close of play, Gujarat were tottering at 74/4 with Aditya Thakare picking up all four wickets for the defending champions.

In Indore, Uttar Pradesh won by seven wickets against Madhya Pradesh in Group B.

Meanwhile, only 9.3 overs of play was possible in Bengal and Delhi's Day 3 Group A match where Delhi still trail Bengal by 101 runs with three wickets in hand. For the home team, Mukesh Kumar took three wickets and Shahbaz Ahmed snared two to dent Delhi's charge.

In Jammu, Chhattisgarh were 270/4 with Harpreet Singh Bhatia leading from the front with a 116 as Abhimanyu Chauhan scored 51.

Jaydev Unadkat Cricket
Get the latest Cricket news, check out the India cricket schedule, Cricket live score . Like us on Facebook or follow us on Twitter for more sports updates. You can also download the NDTV Cricket app for Android or iOS.