Ishwar Pandey, Puneet Datey picked up 4/45, and 3/30 respectively to dismiss Bengal for 121 in the Ranji Trophy quarterfinal game in Mumbai. 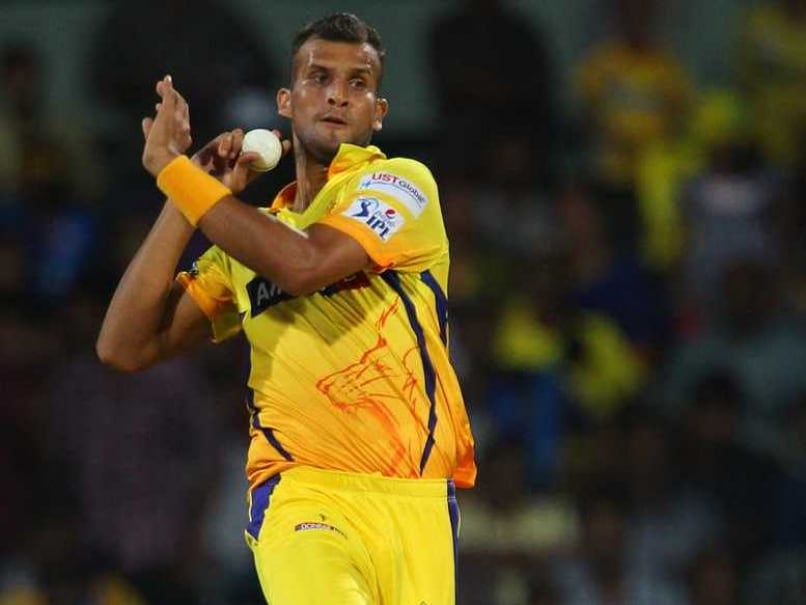 On a day dominated by pace bowlers from both sides, Madhya Pradesh held the upper hand over Bengal by taking a first innings lead of 227 runs in their Ranji Trophy quarterfinal at the Brabourne Stadium. (Read More in Cricket)

Choosing not to enforce the follow-on, Madhya Pradesh ended Day Two at 14 without loss in their second innings - for an overall lead of 241 - with openers Aditya Shrivastava batting on 10, and Jalaj Saxena on 4.

Bengal bowlers did well this morning, when their pace duo of Veerpratap Singh and Ashok Dinda utilised the second new ball productively to grab the last six wickets of Madhya Pradesh for the addition of 94 runs to the overnight 254 for 4.

The duo showed better control on a helpful track than Wednesday to share six wickets equally this morning and restrict Madhya Pradesh to 348 after they appeared headed for a much bigger total when play commenced this morning.

However, the Bengal batsmen showed little application, barring opener Abhimanyu Easwaran who stood tall when wickets fell around him to make a gritty 48, as the Madhya Pradesh pace attack led by Ishwar Pandey, sliced through their top order.

But for Easwaran's watchful 149-minute essay in which he faced 100 balls and hit six fours and showed good technique against the pacers, there was little of note in their batting.

Then Pandey's new ball partner Puneet Datey, who got good lift off the track, dismissed Easwaran and Kumar Shaw in successive overs in his second spell of 6-0-14-2 to leave Bengal tottering at 72 for 6 before Shreevats Goswami (22) and Ashok Dinda (21) made sure the total crossed 100.

All the ten Bengal wickets to fall were shared by the Madhya Pradesh medium pace trio of Pandey (4 for 45), Puneet Datey (3 for 30) and Chandrakant Sakure (3 for 38).

Wickets fell like pack of cards with as many as 16 batsmen perishing on the second day at the end of which Assam find itself in a significant stronger position against Punjab in a quarterfinal match of the Ranji Trophy in Valsad.

Starting the day at 223 for eight, overnight batsman Jamaluddin Syed Mohammad (121) added 71 runs to his overnight score and hit the bulk of the runs to take Assam to a respectable score of 323. He hit 16 boundaries and two sixes during his valiant knock.

Syed Mohammed converted his overnight 50 into his second first-class hundred. He held on to the innings for 21.3 overs with the final two wickets and in the process amassed 100 runs.

Middle-order batsman Mayank Sidhana, who struck nearly 60 per cent of their first-innings total, remained unbeaten on 80 off 131 balls with 10 fours while eight of his team-mates perished for single digits.

In reply, Punjab had fallen to 13 for four in the fifth over as Arup and ran amok.

Mandeep Singh and Gurkeerat Singh got out for ducks, leaving Sidhana and Uday Kaul (25) to resurrect the innings. The duo put on 73 runs together before part-timer Pallavkumar Das (2/9) broke through and the Punjab tail crumbled soon after.

In their second innings, Assam did not have the best of starts and are in a spot of bother at 23 for four.

Assam's batsmen pushed their first-innings lead of 186 to 209, but had a lot of trouble doing so thanks to left-arm seamer Barinder Sran's three for 11.

In reply to Vidarbha's paltry 151, Saurashtra scored 375 riding on Jogiyani's 130 and Jackson's attacking 122. Together they added 206 runs for the fourth wicket to take the match away from Vidarbha's grasp. India speedster Umesh Yadav took 5 for 81.

Having taken a lead of 224, Vidarbha were 17 for no loss in their second innings.

With a lead of 207, Saurashtra bowlers will go for the kill in their aim to finish the match on the third day itself.

The day saw wicketkeeper-batsman Jogiyani patiently bat for nearly seven hours to hit 17 boundaries and two sixes in 261 balls. But it was Jackson, who smacked 13 fours and six sixes in 175 balls in a knock that turned out to be the gamechanger.

After a cracking century, left-handed opener Akhil Herwadkar spun web around Jharkhand batsmen with his off-breaks as heavyweights Mumbai took a step closer towards qualifying for the semi-finals of the Ranji Trophy match in Mysore.

Mumbai ended their first innings on 416 with domestic stalwart Abhishek Nayar playing a captain's knock of 74 off 167 balls with seven boundaries and a six. With useful contributions from wicketkeeper-batsman Sufiyan Shaikh (23) and spinner Iqbal Abdullah (33), Mumbai got more than 100 runs from the last four partnerships.

In reply, Jharkhand were reeling at 150 for eight with another 57 runs required to save the follow-on.

Herwardkar and Abdullah were wreckers-in-chief with figures of 3/26 and 3/39 respectively. Skipper Nayar and Shardul Thakur took a wicket each. In fact speedster Shardul was brought on as the third change as left-arm spinner Vishal Dabholkar started proceedings with India discard Dhawal Kulkarni.

Opener Anand Singh has been the top-scorer so far with 39 while Kaushal Singh (22 batting) is the only other player to cross 20-run mark.

Comments
Topics mentioned in this article
Ishwar Pandey Ashok Dinda BEN MP Cricket
Get the latest updates on India vs South Africa and check out  Schedule, Results and Live Score. Like us on Facebook or follow us on Twitter for more sports updates. You can also download the NDTV Cricket app for Android or iOS.