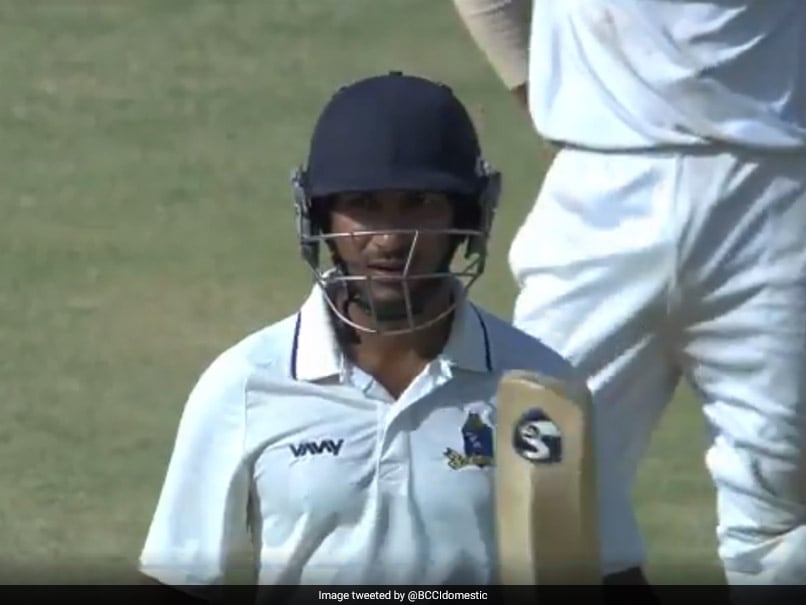 Anustup Majumdar was unbeaten on 58 off 134 balls at stumps on Day 4.© Twitter

Bengal's 'Man Friday' Anustup Majumdar stood between Saurashtra and Ranji Trophy with a defiant unbeaten 58 as the summit clash entered a tantalising final day with the visitors needing 72 runs more. Bengal ended the fourth day at 354 for six as Majumdar added 91 runs for the unbroken seventh wicket stand with Arnab Nandi (28 batting, 82 balls), who showed a lot of courage despite getting hit on the finger by Jaydev Unadkat delivery.

Majumdar, who had bailed Bengalout of a precarious position in the quarter as well as semi-final, was the saviour again and got much needed support from Nandi as the duo batted out the entire evening session to keep the match evenly poised going into day five.

The home team was guilty of poor fielding and allowing easy runs to Bengal in the final session where 90 runs were scored.

Harvik Desai at first slip dropped a regulation catch of Majumdar, who was on 10 at that time, and it proved to be a costly miss.

On an absorbing day four, Bengal won the morning and evening session while Saurashtra stayed in the game by taking three wickets in the afternoon.

By day three, it had become clear that final will be decided by the first innings lead and both teams were locked in a fierce battle on day four.

They frustrated Saurashtra in the wicket-less morning session, scoring 89 runs in 29 overs. With the odd ball keeping low, the predictable ploy was to target the stumps and bring the ball back in, which Saurashtra pacers managed to do both with the old and the second new ball. While Chatterjee, who resumed the day on 47, was solid in defence, Saha lived dangerously.

The India Test wicketkeeper, playing his first Ranji Trophy game of the season, survived two close DRS calls for LBW off lead pacer Jaydev Undakat and a suicidal attempt for a single that could have easily had him run out.

He was also dropped in the gully region on 46 but instead the ball deflected to the boundary, bringing up his half century.

The limited DRS in use was a talking point once again with Unadkat at the receiving end on both occasions with Saha being the batsman.

In the first instance, which took place in the third over of the day, Saha was adjudged out by the on-field umpire but on referral, third umpire S Ravi gave him not out. The ball shaped back in at sharply and Saha appeared to be plumb in front.

The second instance came late in the session and this time the ball seemed to be crashing the stumps but the on-field umpire did not give it out this time.

On referral, the replays showed only half of the ball was in line of the impact, therefore, the third umpire stayed with the on-field umpire's call, much to the frustration of Unadkat.

He was so sure about the call that he started celebrating even before the umpire's decision.

It was a shaky knock from Saha but he did have his moments, including two gorgeous cover drives off Unadkat before stepping out to smash spinner Jadeja for a straight six over mid-off.

Saurashtra found a much-needed breakthrough in the eighth over after lunch when against the run of play, Chatterjee was caught at short leg off Jadeja.

That allowed Saurashtra to build pressure on the opposition and soon after, Saha's stay in the middle finally ended after played on to his stumps off medium pacer Prerak Mankad.

It was a thick edge which just kissed the off-stump to dislodge the bails.

Towards the end of the afternoon session, left-arm pacer Chetan Sakariya crashed through Shahbaz Ahmed's stumps to make it 263 for six.

It was just the kind of session Saurashstra wanted as they conceded only 46 runs in 28 overs and more importantly took three wickets.

Jaydev Unadkat Anustup Majumdar
Get the latest updates on IPL Auction 2023 and check out  IPL 2023 and Live Cricket Score. Like us on Facebook or follow us on Twitter for more sports updates. You can also download the NDTV Cricket app for Android or iOS.