It was a trip down memory lane as three pillars of Indian cricket met at an awards function in Bangalore. Anil Kumble, VVS Laxman and Rahul Dravid came together to honour Karnataka Sportsmen on Wednesday and as expected there was a sense of nostalgia. 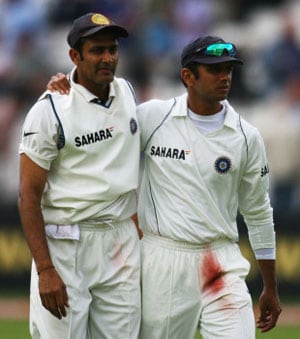 It was a trip down memory lane as three pillars of Indian cricket met at an awards function in Bangalore. Anil Kumble, VVS Laxman and Rahul Dravid came together to honour Karnataka Sportsmen on Wednesday and as expected there was a sense of nostalgia.

Dravid looked back at how times have changed since the days he played school cricket.

"It's always been very hard for me to get recognition from sports writers. Right from the time I was very small. When you play school cricket you are the journalist yourself - and the rule in our school was whoever scored the most runs, if we won the match went to half the newspapers. So you took your cycle as the designated journalist for the day - and you went to half the newspapers and the guy who got the most wickets got the other half. So we shared the load," said Dravid.

Kumble was quick to add a compliment for the media as he highlighted the importance of focussing on school and college cricket matches. He also commented on how lucky Karnataka was to have icons in a variety of sports.

"Whenever we played school cricket and college cricket - we had to run around agencies to give brief scores of the match. Things have changed thanks to the journalists who follow the school cricket...It is important to be recognised at such a young age. It is always nice to see your name, your photograph, your achievements in the papers. And for that I'd like to thank the journalists for doing great work in promoting cricket. Karnataka is blessed to have icons in every sport, be it badminton, chess, cricket, hockey, athletics, swimming."

The Wall was optimistic about his son's love for the game as Dravid Junior is already showing the early signs.

"I was one of those guys who picked up the morning newspaper as a young boy and started from the back...from the sports page. I am happy to say that my son at 7 does the same thing," he said.

So only time will tell if there is another cricketer in making in the Dravid family.

Comments
Topics mentioned in this article
Cricket VVS Laxman Anil Kumble Rahul Dravid
Get the latest updates on India vs South Africa and check out  Schedule, Results and Live Score. Like us on Facebook or follow us on Twitter for more sports updates. You can also download the NDTV Cricket app for Android or iOS.