Sachin Tendulkar-fan Prithvi Shaw slammed a brilliant 546 to set a new Harris Shield record. Life for this 14-year-old Class IX kid has not been easy. 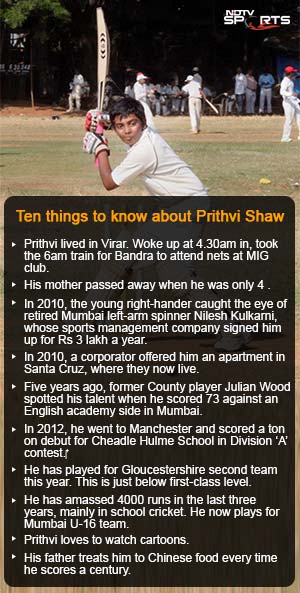 Prithvi Shaw's record 546 in a Harris Shield under-16 school match on Wednesday is already drawing him comparisons with the great Sachin Tendulkar. The 40-year-old Tendulkar, who retired from cricket on November 16, used the famous Harris Shield as a platform and his February 1988 664-run stand with Shardashram Vidyamandir schoolmate Vinod Kambli is now part of cricket folklore. Fourteen-year-old Prithvi, who is a Class IX student in Rizvi Springfield in Bandra (West), has been balancing cricket and studies, much like his idol, Sachin, who criss-crossed Mumbai's cricket pitches on his coach's scooter to get the best practice. (Read: Love Sachin's cover-drive)

Like Sachin, cricket is oxygen to Prithvi, too. The 14-year-old lives and breathes cricket. After Prithvi lost his mother at the tender age of four, his father, Pankaj, not only raised him but helped hone his cricket skills. When the sea breeze was cool and fresh and dawn was breaking, Prithvi would wake up at 4:30 am, pack his kit and school bags and step out to take the 6am train to the MIG ground in Bandra for training. The 90-minute journey from Virar, a middle-class Mumbai suburb, became part of his daily routine as dad and son lived a dream, very much like Sachin and his coach Ramakant Achrekar.

In 2010, Prithvi, all of 11, caught the eye of former Mumbai left-arm spinner Nilesh Kulkarni, whose sports management company signed him up for an annual stipend of Rs 3 lakh. There was more help forthcoming when a corporator offered the talented boy and his family a flat in Santa Cruz. It considerably reduced travel time and helped Prithvi focus on his cricket and of course, studies. (Read: Why schoolboy Prithvi Shaw is trending in India)

Prithvi's immense batting talent impressed former County cricketer Julian Wood. After he scored a lovely 73 against his academy side, Wood offered Prithvi a stint at his English academy. In 2012, Prithvi spent three months in Manchester and mastered English conditions to a nicety. He even scored a century in his debut school match for Cheadle Hulme School in Cheshire.

A boy who loved to score big runs, Prithvi even had a stint with Gloucestershire second team this year. This was a big leap for the Mumbai lad because he was playing just one rung below the County/first-class level. All the experience came in handy on Wednesday when Prithvi stroked to a record 330-ball 546, laced with 85 fours and five sixes.Â  Prithvi's record knock erased Armaan Jaffer's 473, scored in a Harris Shield match earlier this year.

Just like Sachin, Prithvi is a foodie and every time he scores a century, father buys him his favourite Chinese dishes. Like every child his age, cricket is not his only fantasy. Prithvi is addicted to cartoons but his real big dream centres around the bat and ball.

Comments
Topics mentioned in this article
Cricket Sachin Ramesh Tendulkar
Get the latest updates on Fifa Worldcup 2022 and check out  Fifa World Cup Schedule, Stats and Live Cricket Score. Like us on Facebook or follow us on Twitter for more sports updates. You can also download the NDTV Cricket app for Android or iOS.