In an effort to revive international cricket in Pakistan, the PCB are in serious talks with its Sri Lankan counterparts for a short ODI and Twenty20 series in the troubled country later this year. 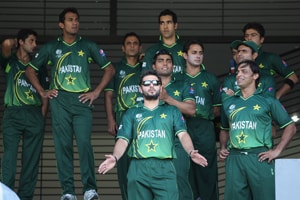 In an effort to revive international cricket in Pakistan, the PCB are in serious talks with its Sri Lankan counterparts for a short ODI and Twenty20 series in the troubled country later this year.

According to Pakistan Cricket Board sources, Sri Lanka Cricket is ready to send its team for the short limited overs series but want the Test rubber to be played in the neutral venue of Dubai and Abu Dhabi.

"The talks with the Sri Lankans have been pretty positive so far and we are hopeful the series will be split into two parts with the limited over games in Pakistan," one source said.

"They have also indicated that they might come and play the limited over games in Pakistan," he added.

Under ICC's Future Tours Program, Sri Lanka are due to tour Pakistan in October-November this year for three Tests, five ODIs and a one-off T20 match.

But with no international team having toured Pakistan since the terrorist attack on the Sri Lankan team in 2009, doubts still hang over the prospect of the series.

Six Pakistani policemen and a van driver were killed in the attack, which also left five Sri Lankan players and an assistant coach wounded.

Since then international cricket teams have marooned Pakistan fearing security issues which also saw the nation lose its share of 14 World Cup matches.

The source said both the boards have agreed to hold the Test matches in the Emirates, where Pakistan last year hosted South Africa for two Tests and an ODIs series.

"Obviously we don't expect them to accept all our terms and conditions and we can understand their situation. We also know that the limited over games in Pakistan can only be possible if the Sri Lankan players are willing to come to Pakistan and also if ICC's special task team on Pakistan gives the clearance," the source said.

Comments
Topics mentioned in this article
Cricket England Cricket Team Australia Cricket Team Bangladesh Cricket Team Pakistan Cricket Team Sri Lanka Cricket Team
Get the latest updates on ICC T20 Worldcup 2022 and CWG 2022 check out the Schedule, Live Score and Medals Tally. Like us on Facebook or follow us on Twitter for more sports updates. You can also download the NDTV Cricket app for Android or iOS.