Sri Lanka defeated Pakistan by 64 runs in Lahore on Saturday to go 1-0 up in the three-match T20I series. 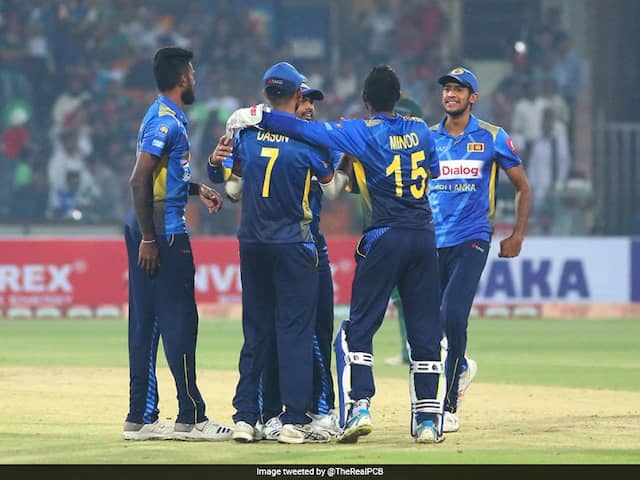 Sri Lanka were too good for the hosts in the first T20I of the three-match series.© Twitter

Mohammad Hasnain, Pakistan fast-bowler,  became the youngest cricketer to take a hat-trick in Twenty20 Interntaional (T20Is) during the first T20I against Sri Lanka in Lahore on Saturday. Hasnain achieved the feat in his second spell when he removed Bhanuka Rajapaksa on the final ball of his third over. The 19-year-old, then removed Shehan Jayasuriya and Sri Lanka captain Dasun Shanaka off consecutive deliveries in the 19th over to complete his hat-trick. However, Hasnain's heroics with the ball were not enough as Sri Lanka managed to win the first T20I by 64 runs.

After winning the toss, Pakistan captain Sarfaraz Ahmed opted to bowl in Lahore. Sri Lanka came out with positive intent and the openers put on a 84-run stand.

Pakistan's bowlers came back in the second half and restricted Sri Lanka to 165 for five in 20 overs.

Mohammad Hasnain was the most successful bowler as he finished with figures of three for 37 in his four overs.

Chasing 166 runs for the win, Pakistan kept on losing wickets at regular intervals.

Nuwan Pradeep removed Babar Azam in the second over and Umar Akmal's return to the international arena lasted for just one ball as he registered a golden duck.

Isuru Udana cleaned up Ahmed Shehzad to leave Pakistan 22 for three inside first five overs. Iftikhar Ahmed tried to steady the ship with Sarfaraz but a mix-up in the middle ended their 46-run stand.

Pakistan couldn't recover from that blow as they were bundled out for 101 in the 18th over.

Sri Lanka lead the three-match T20I series 1-0. The last two matches will played at the Gaddafi stadium on Monday and Wednesday.

Mohammad Hasnain Gaddafi Stadium, Lahore Cricket
Get the latest Cricket news, check out the India cricket schedule, Cricket live score . Like us on Facebook or follow us on Twitter for more sports updates. You can also download the NDTV Cricket app for Android or iOS.