Pakistan's captain Azhar Ali thanked Sri Lanka Tuesday for returning to Pakistan for the first Test tour there in a decade. 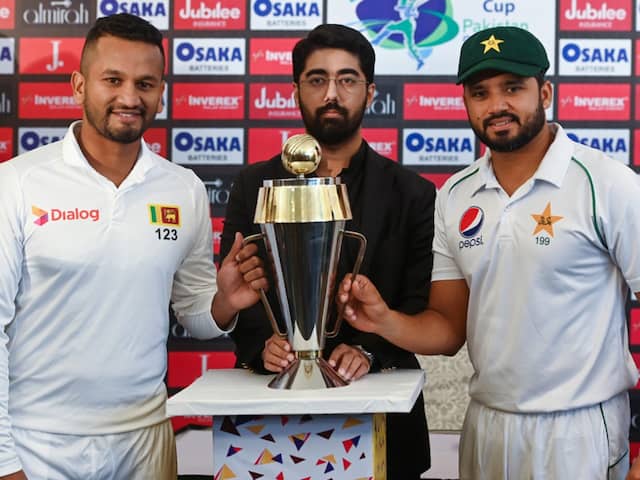 Pakistan and Sri Lanka captains pose with the trophy for the Test series.© AFP

Pakistan's captain Azhar Ali thanked Sri Lanka Tuesday for returning to Pakistan for the first Test tour there in a decade, after a fatal militant attack on their team in 2009 drove international cricket away. "It's a historic occasion and all the players are excited to be part of this," Azhar, who has played 75 Tests -- but, until now, none at home -- said at a press conference in Rawalpindi with his counterpart, Dimuth Karunaratne. "We thank the Sri Lankan team for coming here. The last Test was also against them so their visit will send a strong message to the world that we need to support each other," he said.

Eight people were killed and several players and officials were wounded when militants opened fire on the Sri Lankan team bus travelling to a Test in Lahore in 2009.

The attack plunged Pakistan into sporting isolation during its years-long battle with militancy, with all "home" venues played in the United Arab Emirates.

But with security dramatically improving in recent years international cricket began creeping back starting in 2015, albeit only for limited overs.

Sri Lanka will play two Tests under heavy security, one in Rawalpindi and the second in Karachi, ending a decade-long absence for cricket's five-day format.

They will be the first home Tests for all 16 players in the Pakistan squad.

"Cricket is the biggest thing and if the youngsters can't see matches here then it's a big loss for our cricket and budding players," Azhar said.

"I am sure our grounds will host more matches in the years to come."

Karunaratne -- who refused to tour Pakistan for a limited over series in September-October this year -- shared his rival's sentiments.

"I am really excited... The players are excited to be part of this historic occasion," he said.

Sri Lanka on the rise

Sri Lanka are on the up in Test cricket after becoming the first Asian team to win a series in South Africa earlier this year.

They then drew a Test series 1-1 against New Zealand at home in August, their first fixture in the World Test championship.

Sri Lanka have not lost a series in Pakistan since 1992 -- winning two and drawing two.

They beat Pakistan 2-0 in their last series in UAE two years ago, a win Karunaratne hoped will motivate them.

"We played good cricket in 2017 so that confidence is with us," he said.

Pakistan, meanwhile, are smarting from a 3-0 defeat in South Africa and 2-0 in Australia this year.

"Test cricket demands discipline and they (Sri Lanka) are a well disciplined side, whether playing at their home or away so we have to play disciplined and good cricket," Azhar said, adding that as captain he has to "lead by example".

He managed just 59 in six innings in South Africa and 62 in four in Australia.

The second Test is in Karachi from December 19.