Hashim Amla hit 13 fours in his unbeaten 118 off 250 balls as South Africa's top order collapsed against pace and the lower middle-order fell to spinners. 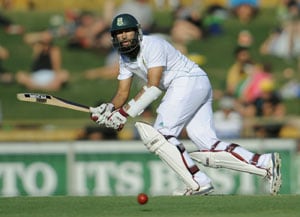 South Africa's Hashim Amla scored a fighting century but Pakistan still restricted the No. 1-ranked Test team to 245-8 on the opening day of the first Test on Monday. (Match Scorecard)

Amla hit 13 fours in his unbeaten 118 off 250 balls as South Africa's top order collapsed around him against pace and the lower middle-order fell to spinners.

Left-arm spinner Zulfiqar Babar (3-89), making his debut at the age of 34, bowled 17 wicketless overs before claiming three wickets in the last session.

The 7-foot-1-inch left-arm fast bowler Mohammad Irfan (2-42) had struck with the new ball and reduced South Africa to 43-3 after captain Graeme Smith won the toss and elected to bat.

Amla rescued the Proteas by adding 95 runs for the fifth wicket with J.P. Duminy (57) before Babar struck in the last session and the visitors lost five wickets in space of 23 runs.

But Amla exhibited superb technique and temperament against both spinners and fast bowlers after he arrived at the crease in only the third over of the day at Sheikh Zayed Stadium and showed why he is rated as the No. 1 Test batsman.

He raised his half century off 95 balls shortly after lunch with a pulled boundary to square leg off fast bowler Junaid Khan and brought up his 20th Test century off 201 balls by driving Babar to long off in the last session.

Duminy and Amla looked to have resurrected the innings with nearly a century stand before he swept Babar in the deep to trigger the collapse. Duminy hit six fours and a six and should have been caught behind on 56 but Adnan Akmal dropped a sitter off Saeed Ajmal.

Faf du Plessis was also beaten by the turn of Babar and got an edge to gully while Robin Petersen was bowled through the gap between bat and pad off the left-arm spinner's delivery that spun sharply into the left-hander.

Amla and A.B. de Villiers also batted cautiously in the second session for a 61-run stand after Pakistan had reduced the Proteas to 66-3 at lunch.

Pakistan struck through an unusual run out in their only success of the session when de Villiers played a defensive stroke and the ball rolled to Younis Khan in the first slip. Khan threw the ball to alert wicketkeeper Adnan Akmal, who whipped the bails off in a flash with de Villiers not dragging his backfoot fully back into the crease.

South Africa made sure they didn't allow Ajmal (1-57) much success as the offspinner's solitary wicket came late in the day when he had Vernon Philander leg before wicket.

Earlier, Irfan dismissed Alviro Petersen (3) and Smith (15) to have the South Africans reeling at 19-2. Petersen was caught at short leg and Smith - returning to international cricket after ankle surgery in May - was adjudged caught behind after Pakistan successfully called for a television referral against the South African captain to reverse onfield umpire Rod Tucker's original decision.

Wicketkeeper Akmal grabbed a well-judged catch when Kallis - also returning to international cricket for the first time since playing in IPL in May - got an inside edge off another left-arm fast bowler, Junaid Khan.

South Africa, which has not lost an away Test series since a defeat to Sri Lanka in 2006, thrashed Pakistan 3-0 in a Test series at home in February.

Comments
Topics mentioned in this article
Cricket Pakistan Cricket Team South Africa Cricket Team JP Duminy Shahid Afridi Mohammad Irfan Inzamam-ul-Haq Hashim Amla Saeed Ajmal
Get the latest updates on ICC T20 Worldcup 2022 and CWG 2022 check out the Schedule, Live Score and Medals Tally. Like us on Facebook or follow us on Twitter for more sports updates. You can also download the NDTV Cricket app for Android or iOS.