Peterson, while batting, was pushed by Akmal while trying to pick up a bail. Peterson reacted by pushing back the Pakistani wicketkeeper. 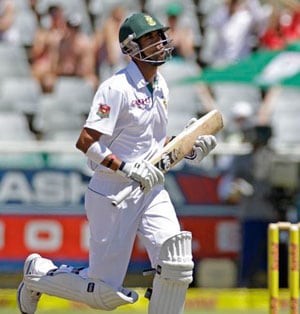 Match referee David Boon has fined Pakistan wicketkeeper Adnan Akmal and South Africa spinner Robin Peterson 50 per cent of their match fees for pushing each other during the first Test.

The International Cricket Council says on Friday the players pleaded guilty to violating the code of conduct during the fourth and final day on Thursday at Sheikh Zayed Stadium.

Peterson, while batting, was pushed by Akmal while trying to pick up a bail. Peterson reacted by pushing back Akmal.

Pakistan recorded a seven-wicket victory and went 1-0 up in the two-match series.

Wily spinner Saeed Ajmal took four wickets to fire Pakistan to a win over world number one South Africa in the first Test in Abu Dhabi on Thursday.

The off-spinner (4-74) was superbly supported by left-arm paceman Junaid Khan (3-57) and fellow spinner Zulfiqar Babar (2-51) as South Africa collapsed to 232 in their second innings on the fourth day at Sheikh Zayed Stadium.

That left Pakistan to score 40 runs for their overall fourth win over South Africa and take a 1-0 lead in the two-match series.

Pakistan made heavy weather of the small target losing openers Shan Masood (nought), Azhar Ali (three) and Khurram Manzoor (four) in the space of seven runs by the fourth over.

Senior batsmen Younis Khan (28) and Misbah-ul Haq (nine) were left to see off the target with Pakistan captain deservedly hitting the winning six.