The sponsor's name for the Pakistan-New Zealand Test series had fans in a tizzy. 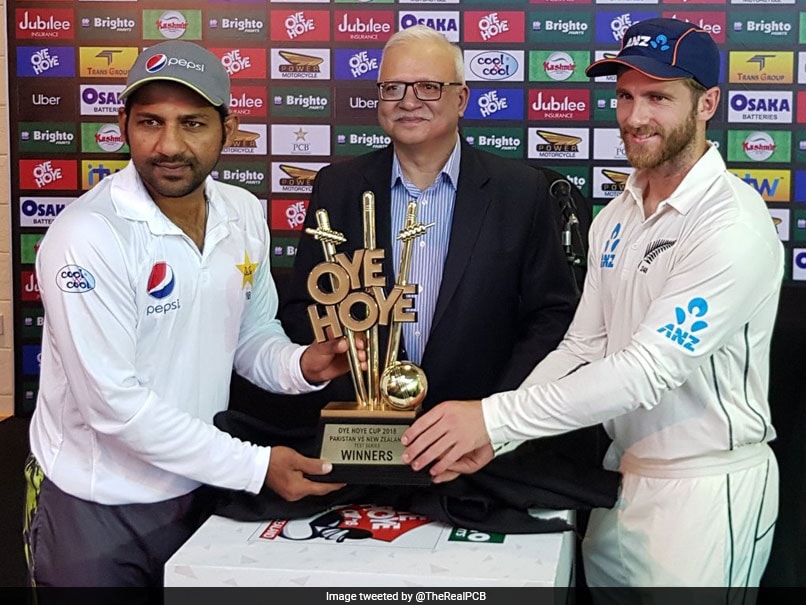 The design of the trophy didn't go well with cricket fans.© Twitter

After the infamous 'Biscuit' trophy of Pakistan Cricket Board (PCB) for their T20I series against Australia last month, the cricket board found itself at the receiving end for putting sponsor's name on trophy, yet again. The PCB unveiled the 'Oye Hoye Cup 2018' for the Test series between Pakistan and New Zealand at Sheikh Zayed Cricket Stadium in Abu Dhabi on Thursday. Sarfraz Ahmed and Kane Williamson posed for the cameras, but what really caught the attention was 'Oye Hoye Cup'. The design of the trophy didn't go well with cricket fans and PCB got the similar treatment on the Internet to what the 'Biscuit' trophy did.

you need to hire an artist who can design a trophy that befits the occasion of top level cricket. The sponsors are making these cheesy trophy which makes these trophies jokes;

@ISyedIWasHungry I thought they couldn't top the freakin biscuit

PCB should stick to one sponsor just like Aus Eng Nz...these kind of sponsors makes awful tophies ...first tuc biscuit & now this one

PCB did everything to break the heart of Pakistani Cricket fan.
This is also a kind of attack to discourage spirit of Pakistani fan

Earlier, PCB and tournament organizers for the recently concluded T20I series between Pakistan and Australia were trolled on social media for literally having a biscuit on the trophy.

As far as the series is concerned, Pakistan bagged the T20I series while both the sides shared the ODI trophy 1-1.

Now coming to the Test series, the three fixtures against New Zealand provide Sarfraz Ahmed an opportunity to achieve what his predecessor and the most successful captain in the history of Pakistan cricket's red-ball history, Misbah-ul Haq, could not.

During their unbeaten era in the United Arab Emirates that stretched six long years, Pakistan defeated almost every visiting Test side, except for New Zealand and South Africa.

New Zealand visited UAE after Pakistan defeated a strong Australian side and pulled off a 1-1 draw in a three-match series. Till date, the Kiwis remain one of the four sides that won a Test in the UAE since Pakistan adopted the country as their home.