Pakistan Super League 2021: Earlier this week, the PCB urged the players, players' support personnel, and match officials featuring in the PSL to religiously follow the bio-secure and PCB's COVID-19 Protocols. 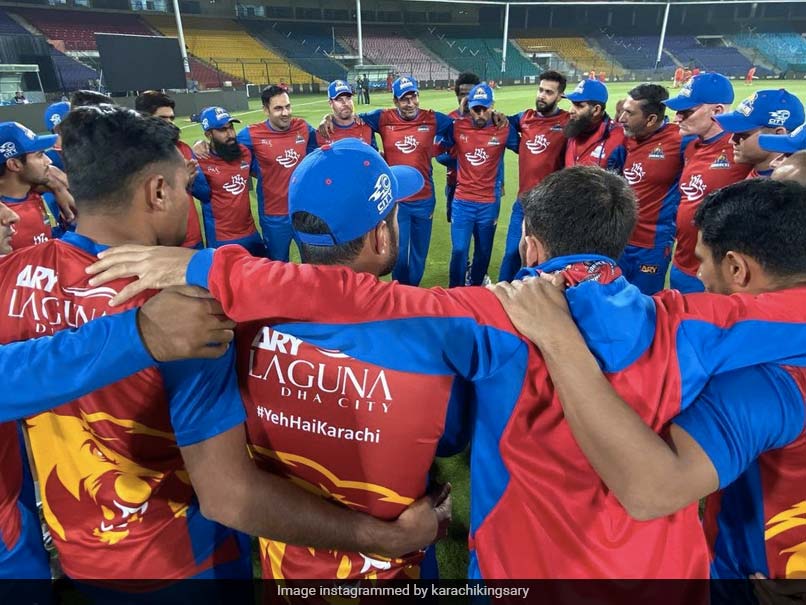 PSL 2021: The Karachi Kings squad in a huddle before a practice match.© Instagram

The Pakistan Cricket Board (PCB) on Saturday confirmed that a player from a franchise featuring in the Pakistan Super League (PSL) 2021 has been tested positive for COVID-19. The opening game of PSL 2021 will be played between Karachi Kings and 2019 champions Quetta Gladiators on Saturday and the unnamed player who tested positive for coronavirus has been quarantined for 10 days. "Separately, a player from another franchise team who had shown symptoms and was in isolation, has tested positive. He will now remain in quarantine for 10 days and will require two negative tests in order to integrate again with the side in accordance with the applicable re-entry protocols," the PCB said in an official statement.

Further, a player and an official of one of the teams taking part in the PSL 2021 have been placed in a three-day quarantine after they came into contact with a person outside the bio-secure bubble on Friday.

The two individuals will now require two negative tests during the three-day quarantine period before they can re-enter the bio-secure bubble in accordance with the re-entry protocols.

"The PCB is disappointed that two members of one of the sides showed carelessness and violated the bio-secure bubble protocols by coming into a contact with a person who was not part of the bubble," the PCB said.

"As reiterated previously, the health and safety of all individuals associated with HBL Pakistan Super League 6 is of paramount importance to the PCB and the event. All players, player support personnel, match officials and family members are once again reminded to diligently follow the PCB Covid-19 Protocols as the PCB will not allow anyone to affect the integrity and credibility of the tournament," it added.

Earlier this week, the PCB urged the players, players' support personnel, and match officials featuring in the PSL to religiously follow the bio-secure and PCB's COVID-19 Protocols to ensure the health and safety of all participants as well as the integrity of the 34-match event.

After the opening match, 2020 finalists Lahore Qalandars will take on 2017 winners Peshawar Zalmi in a day fixture, while two-time winners Islamabad United will square off against Multan Sultans in the evening on Sunday.

The 30-day tournament will culminate with the final at the Gaddafi Stadium in Lahore on March 22, the first time the venue will stage the final since 2017.

Pakistan Cricket Team Pakistan Cricket Board Cricket
Get the latest updates on IPL Auction 2023 and check out  IPL 2023 and Live Cricket Score. Like us on Facebook or follow us on Twitter for more sports updates. You can also download the NDTV Cricket app for Android or iOS.