Watch: Niroshan Dickwella's Hilarious Response After Pak Journalists Mistake Him For Another Player, Not Once But Twice

Pakistan vs Sri Lanka: Niroshan Dickwella was mistaken for another player, not once but twice. He however handled the faux pas quite well. 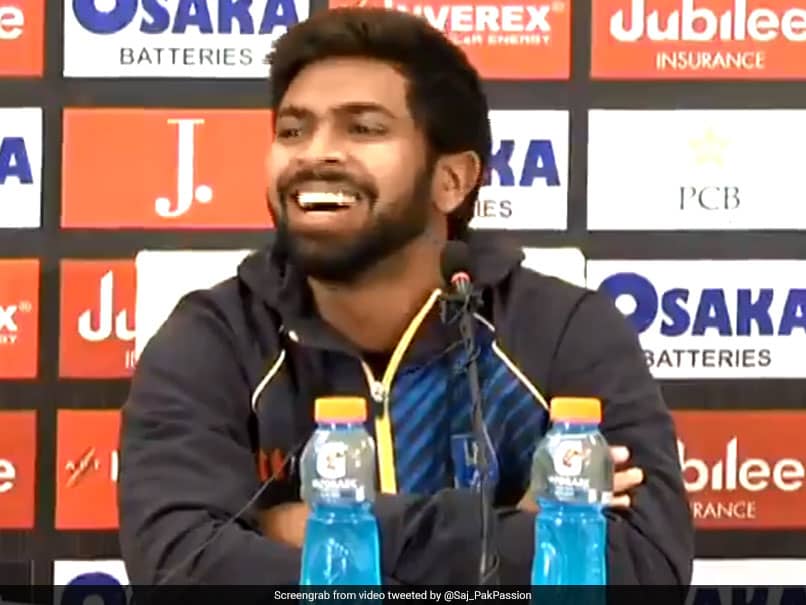 Niroshan Dickwella was mistaken for another player, not once but twice.© Twitter

Test cricket made its long-awaited return to Pakistan after a gap of 10 years. A militant attack on the Sri Lankan team bus killed eight people in March 2009, suspending international cricket in Pakistan as foreign teams refused to visit over security fears. Pakistan's captain Azhar Ali had thanked Sri Lanka for returning to the country. But the weather gods have put a dampener on the long-awaited return to Test cricket in Pakistan. However, at the end of another day plagued by rain and bad light, there was some much-needed laughter in the press conference to ease the pain.

After early stumps were called on Day 2 on Thursday, Sri Lanka's wicketkeeper/batsman Niroshan Dickwella graced the press conference to speak to the media.

However, a couple of Pakistan journalists mistook him for another Sri Lankan player -- Dhananjaya de Silva, who is the top-scorer with 72 not out.

Dickwella, to his credit, laughed off the case of the mistaken identity but not before a hilarious response to the Pakistan journalist.

After correcting the first journalist who thought he was De Silva, Dickwella couldn't stop himself from giving a response the second time he was posed a question, which in fact was for De Silva.

Pakistan had made a fine start on Day 1 as Sri Lanka were reduced to 202 for five before bad light stopped play. Thursday saw the conditions worsen further as play was halted for all but 83 minutes on Day 2, during which Sri Lanka added 43 runs in 18.2 overs before stumps were drawn.

Wet weather delayed the start of play between Pakistan and Sri Lanka in Rawalpindi on Friday as well as early lunch was taken without a ball being bowled.

Sri Lanka, who won the toss and batted, were 263-6 in their first innings with Dhananjaya de Silva unbeaten on 72 and Dilruwan Perera on two.

Dhananjaya de Silva Pakistan vs Sri Lanka, 1st Test Cricket
Get the latest updates on India vs England Series, India vs England , live score and IPL 2021 Auction . Like us on Facebook or follow us on Twitter for more sports updates. You can also download the NDTV Cricket app for Android or iOS.