Jonty will follow in the footsteps of former paceman Fanie de Villiers, rugby Springbok Stefan Terblanche and Paralympics swimming star Natalie du Toit. Knowing his abilities, nothing can be put past him. 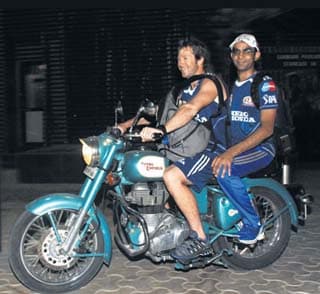 Former South African all-rounder Jonty Rhodes has taken up off-road racing for the final round of the Absa Off-Road Championship to be held here later this month.

The South African Off-road Racing Commission has announced that Rhodes will join a host of celebrities for the prestigious Gold 400 Off-road race on November 23 and 24 at the West Rand.

Rhodes is to co-drive for South African champion Archie Rutherford in the SA Warranties-sponsored Nissan Navara.

The fielding skills that made Rhodes an international celebrity in the cricket arena will be very different to those he will have to apply with his co-driver to traverse fields of another kind with various obstacles on them.

The sports personalities participating in the event have been selected because of their highly competitive spirit, according to the organisers.

"Sports personalities are not just included for spectator appeal - they have already proven their competitiveness by taking places in the top ten," said Terrence March. Rhodes retired in 2000 after scoring more than 2,500 runs in 56 Tests and almost 6,000 ODI runs in 245 games.

Since his retirement, Rhodes has been in great demand as a fielding coach, having worked with both the Proteas and the Mumbai Indians in the IPL.

Comments
Topics mentioned in this article
Cricket Jonty Rhodes
Get the latest updates on IPL 2021, IPL Points Table , IPL Schedule 2021 , live score . Like us on Facebook or follow us on Twitter for more sports updates. You can also download the NDTV Cricket app for Android or iOS.