New Zealand Women vs India Women: Amelia Kerr's 68-run knock was followed up by a dominant bowling performance as New Zealand defeated India by 63 runs in a rain-curtailed fourth ODI of the five-match series at the John Davies Oval, Queenstown on Tuesday. 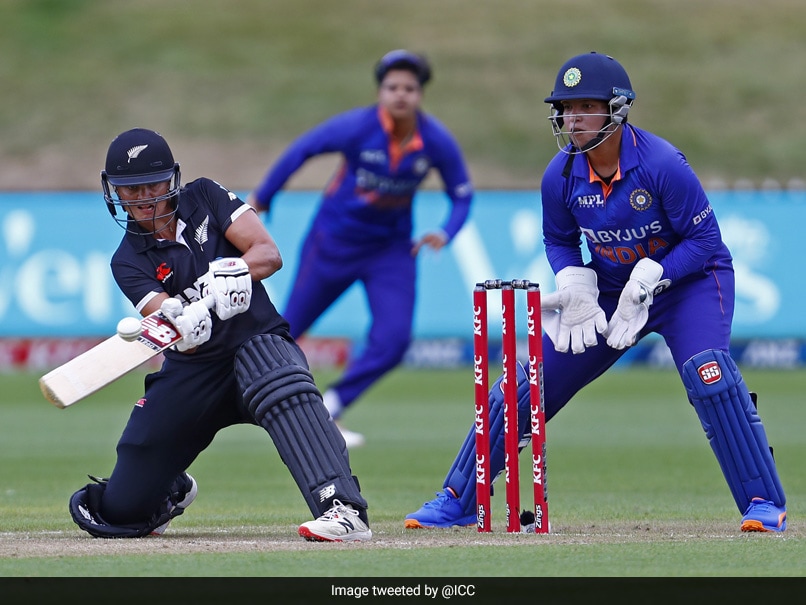 NZW vs IndW: India were defeated by a spirited New Zealand side in the 4th ODI.© Twitter

Amelia Kerr's 68-run knock was followed up by a dominant bowling performance as New Zealand defeated India by 63 runs in a rain-curtailed fourth ODI of the five-match series at the John Davies Oval, Queenstown on Tuesday. With this win, New Zealand has gained a 4-0 lead in the five-match series. The final ODI will now be played on Thursday. The fourth ODI was curtailed to 20-overs per side after rain played spoilsport. Chasing 192, India got off to the worst start possible as the side lost Shafali Verma (0), Yastika Bhatia (0) and Pooja Vastrakar (4) in quick succession and they were reduced to 12/3 in the third over. Soon after, Smriti Mandhana (13) was sent back to the pavilion by Hayley Jensen and India was in a spot of bother at 19/4 in the fifth over.

Richa Ghosh and Mithali Raj then got together at the crease and the duo revived the Indian innings. Ghosh brought up her fifty off just 26 balls and as a result, she registered the fastest fifty by an Indian batter in Women's ODIs. However, the 18-year-old departed after playing a knock of 52 in the 13th over and India was reduced to 96/5.

India was not able to recover from this blow, and in the end, New Zealand registered a comfortable win.

Earlier, Amelia Kerr played a knock of 68 runs from 33 balls with the help of 11 fours and 1 six as New Zealand posted 191/5 against India. Suzie Bates and Sophie Devine also played useful innings of 41 and 32 as the White Ferns posted a score of more than the 190-run mark.

Amy Satterthwaite also chipped in with a knock of 32 runs from 16 balls. For India, Renuka Singh returned with two wickets.

New Zealand Women Cricket
Get the latest updates on IPL Auction 2023 and check out  IPL 2023 and Live Cricket Score. Like us on Facebook or follow us on Twitter for more sports updates. You can also download the NDTV Cricket app for Android or iOS.