New Zealand's on-field misery matched the Wellington weather as South Africa sauntered to 246 for 2 after rain accounted for almost four hours of play for the second consecutive day. 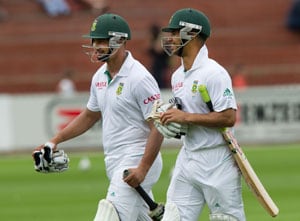 New Zealand's on-field misery matched the Wellington weather as South Africa sauntered to 246 for 2 after rain accounted for almost four hours of play for the second consecutive day. Alviro Petersen was four runs short of a hundred when bad light brought the day to an end seven overs after tea, while JP Duminy was not far behind. Not even a furious tailwind from the Vance End, or heavy cloud cover, could create a breakthrough for New Zealand, while Daniel Vettori toiled into the teeth of the northerly. (Scorecard)

Alviro Petersen had been obdurate on the first day, as he fought to make his first substantial contribution of the tour, but adopted a brighter approach on the second with a fifty beckoning. Chris Martin's fourth ball was slapped through midwicket, before an edge from an attempted cover drive brought up the milestone. Positivity paying off, he continued in his assured vein, missing few chances to pierce the field when New Zealand erred.

Duminy eased to his half-century too, crisp cover-drives characterising his first Test innings in two years as South Africa's third-wicket stand swelled beyond 100. Adept at finding gaps in the field, Duminy matched his lively partner's pace and temperament. An inside edge over the stumps, and a top-edged hook that took him past 50 were the only bumps in an otherwise easy knock that helped South Africa consolidate a steady position.

Ross Taylor might have rued not placing a third slip when second-slip Martin Guptill dived over, then palmed two edges off Petersen, but the New Zealand bowlers rarely looked like taking wickets in the chilling wind. Martin swung the ball modestly early on, but could not maintain the movement for long, while Mark Gillespie's gun-barrel straight deliveries were navigated without complaint. Vettori's role was to tie one end down, but even he strayed on occasion, unsettled perhaps by the gusts, and South Africa made good use of a pitch that had settled nicely for batting.