Shikhar Dhawan Ruled Out Of T20I Series In New Zealand Due To Shoulder Injury: Report

Shikhar Dhawan has been ruled out of the T20I series in New Zealand due to a shoulder injury he suffered while fielding against Australia in Bengaluru ODI. 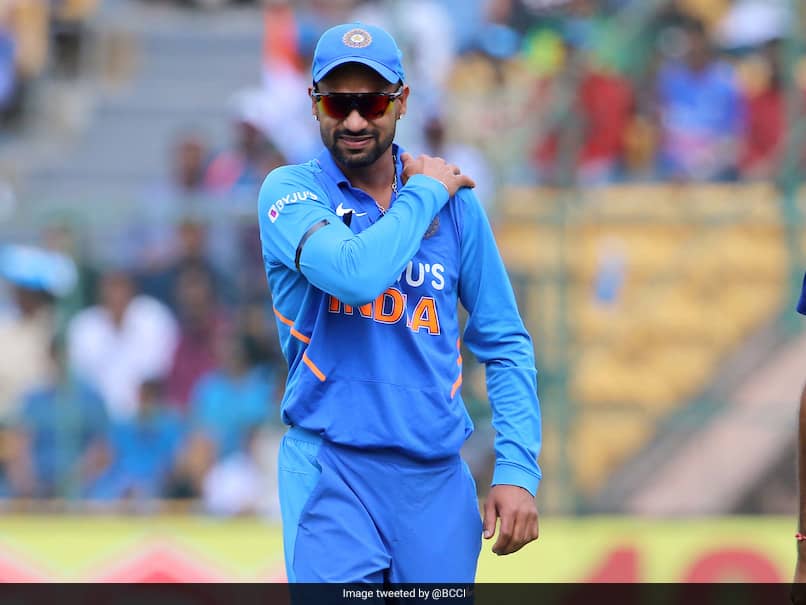 Shikhar Dhawan hurt his shoulder in the third ODI against Australia on Sunday.© Twitter

Shikhar Dhawan, who suffered a shoulder injury in the third One-day International against Australia, has been ruled out of the upcoming five-match Twenty20 International (T20I) series against New Zealand, starting January 24. Shikhar Dhawan did not travel with the team to Auckland on Monday and the selectors are yet to announce his replacement, new agency ANI quoted ESPNCricinfo as reporting. Shikhar Dhawan was taken off the field after he hurt his left shoulder as he dived to save an Aaron Finch shot at the cover region. After the win in Bengaluru, the Board of Control for Cricket in India (BCCI) manager had said that the medical team will assess Dhawan's scans and his participation is in doubt for the New Zealand tour.

"Shikhar's scans are here. The medical team is looking at the scans. He will be assessed, and his condition will be taken care of and then we will take a call as and when we go," the BCCI media manager stated prior to the start of skipper Virat Kohli's post-match press conference.

India faced another injury scare on Monday as fast-bowler Ishant Sharma injured his ankle while appealing in a Ranji Trophy game in Delhi.

"Ishant has twisted his ankle and has swelling. It's looking pretty bad at the moment. We will not risk him again in this match. Let's hope it's not a fracture," a senior Delhi team management member told PTI.

The BCCI are yet to name ODIs and Test squads and Ishant Sharma, who picked 25 wickets in 6 Tests, will be looking to recover in time for the Test series that begins on February 21.

The Indian team left for New Zealand on Monday where they are scheduled to play five T20Is, three ODIs and two Tests.

The two five-day games will be a part of ICC World Test Championship which India leads with 360 points from seven wins out of seven games.