Ben Stokes was unbeaten at 67 at stumps, while Joe Denly scored 71 and Rory Burns made 52 as England edged New Zealand on Day 1. 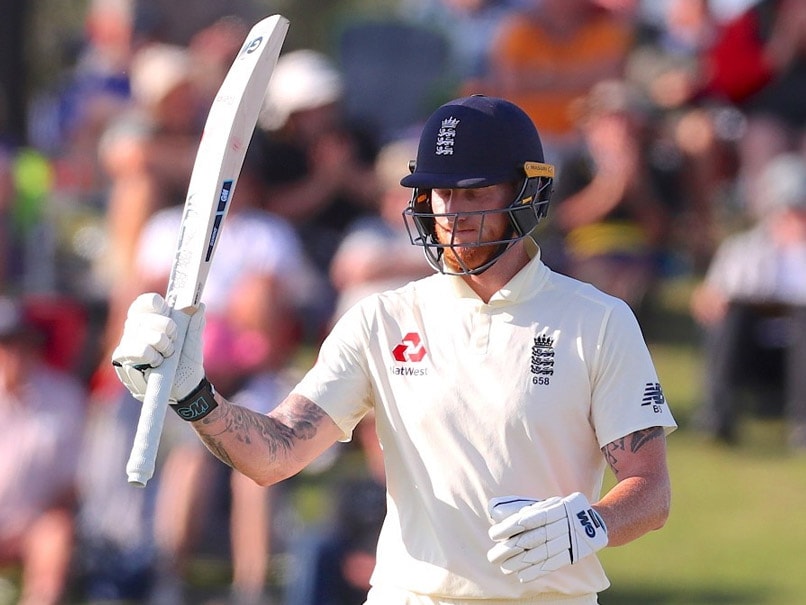 Ben Stokes raises his bat after scoring his half-century© AFP

Half-centuries from Joe Denly and Ben Stokes breathed life into England who reached 241 for four at stumps after a slow start on the first day of the opening Test against New Zealand at Mount Maunganui on Thursday. With England intent on occupying the crease as long as possible -- although captain Joe Root's stay was very brief -- and New Zealand bowling tight lines, run-scoring was not a priority but the day was not without its share of drama.

Denly, who claimed the honours in a fascinating battle with New Zealand's short-ball maestro Neil Wagner, fell for 74 when the second new ball was taken.

New Zealand-born Stokes, who punished Trent Boult with four boundaries off consecutive balls, including one from a dropped catch by Ross Taylor at first slip, was unbeaten on 67 with Ollie Pope on 18.

Denly put on 83 with Stokes for the fourth wicket as England added 120 in the final session, doubling the score, for the loss of only Denly's wicket.

He was caught behind off Tim Southee after earlier ducking and weaving his way through a fascinating battle with Wagner, showing no sign of the ankle injury which kept him out of the Twenty20 series.

Throughout the onslaught, the edges fell short of the cordon, and balls that did beat the bat then missed the stumps, but Denly refused to be intimidated as he smacked five rising balls to the fence.

England's top three played their part in getting a safe start with Surrey pair Rory Burns and Dom Sibley putting on 52 for the first wicket before Burns and Denly added 61 for the second.

Debutant Sibley, the only wicket to fall in the morning session, started his Test career with a four off the first ball he faced on his way to 22, while Burns was out for 52 before tea.

His dismissal brought Root to the crease for what turned out to be a short-lived stay.

Having recited the England mantra of "bat long" when he won the toss, Root took 21 balls to get off the mark with a two and then wafted at a wide next delivery from Neil Wagner and was caught behind.

In his last eight Test innings Root now has three ducks and a two.

Burns might also have been removed cheaply but a caught behind appeal when he was on 10, and the total 14, was turned down.

New Zealand, to their cost, did not review the decision and replays showed there was a faint edge.

Burns offered further chances on 37 and 44 but luck stayed with him until he reached his well-grafted 52, when he gave up his wicket pushing at a wide de Grandhomme delivery and edged it to wicketkeeper BJ Watling.

De Grandhomme, with gentle medium pacers drifting away from the batsmen, finished with two for 28 while Southee and Wagner had a wicket each.

Ben Stokes Joe Denly Cricket
Get the latest updates on T20 World Cup, check out the T20 World Cup Schedule and Live Score . Like us on Facebook or follow us on Twitter for more sports updates. You can also download the NDTV Cricket app for Android or iOS.