New Zealand vs Australia: New Zealand beat Australia by four runs to go 2-0 up in the five-match T20I series. 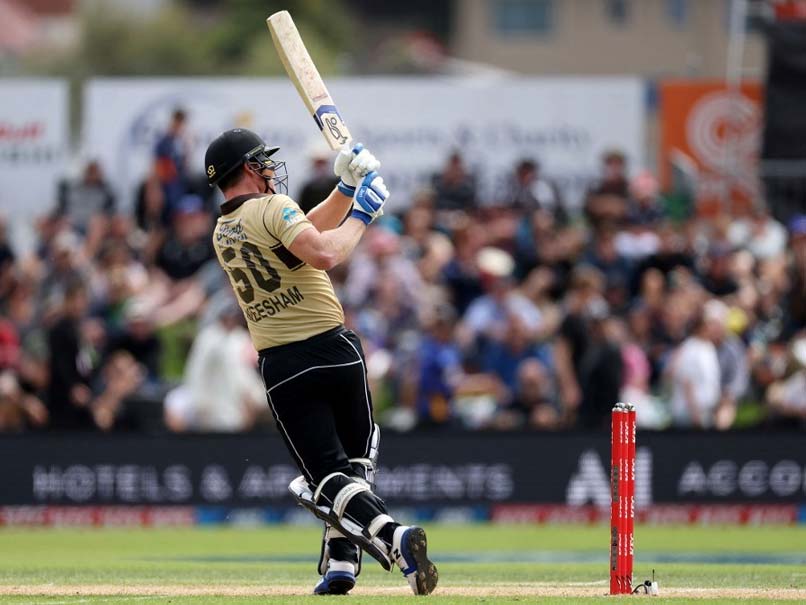 Jimmy Neesham hit a 16-ball 45 and took two wickets in the final over as New Zealand won by 4 runs.© AFP

Veteran batsman Martin Guptill returned to form with a blistering 97 as New Zealand held on for a nail-biting win over Australia in the second Twenty20 international in Dunedin on Thursday. Guptill's Black Caps set Australia a challenging target of 220 after losing the toss but were made to sweat as Australia came within four runs of victory. Both sides took advantage of University Oval's short boundaries in a thrilling match that featured 30 sixes and 434 runs at an average of 10.9 an over.

Marcus Stoinis starred for the Australians with 78 from 37 balls but Guptill's 97 from 50 laid the foundation for New Zealand's win.

New Zealand allrounder Jimmy Neesham was another exceptional performer, taking two wickets in the final over when a rampant Australia needed 15 runs for victory.

Neesham also scored an undefeated 45 off 16 deliveries, including six sixes.

The result puts New Zealand 2-0 up in the five-match series, on the brink of a shock win over the world's second-ranked Twenty20 team.

Guptill's innings gave him the record for the most sixes in Twenty20 internationals with 132, taking him past India's Rohit Sharma on 127.

The 34-year-old clubbed the ball over the boundary eight times, bludgeoning all comers in the Australian attack.

He fell just short of his third Twenty20 century after being caught trying to hit a Daniel Sams delivery out of the ground.

Guptill averaged only 17 in the recent series against the West Indies and Pakistan, then managed just 11.5 in the domestic competition before picking up a hamstring injury.

Pressure on the opener intensified when he made a duck in the first match against Australia on Monday, with calls for uncapped Finn Allen to join the squad.

But he answered his critics with a return to his big-hitting best, bringing up 50 off 27 balls, with eight boundaries, including four sixes.

Guptill insisted he had not changed his approach during the game-turning innings.

"I just went out and tried to do the best I could -- fortunately for me it came off," he said.

While Guptill provided fireworks at one end, Kane Williamson was steady at the other, scoring 53 off 35 balls.

Australia made a solid start in reply, despite skipper Aaron Finch continuing to struggle for runs when he was dismissed for 12.

The tourists were 87 for two at the halfway mark, with rookie batsman Josh Philippe scoring 45 from 32 balls.

He departed as part of a mid-innings collapse that saw Mitch Marsh and Ashton Agar out for first-ball ducks as Santner claimed three wickets in an over.

Stoinis and Daniel Sams came together with Australia looking shaky at 113 for six but staged a remarkable fightback, putting on a 92-run partnership that put victory in Australia's grasp.

But the heroics from Stoinis and Sams -- who scored 41 from 15 balls -- were not enough to get Australia over the line.

James Neesham Cricket New Zealand vs Australia, 2nd T20I
Get the latest updates on IPL 2021, check out the IPL 2021 Schedule and Indian Premier League Live Score . Like us on Facebook or follow us on Twitter for more sports updates. You can also download the NDTV Cricket app for Android or iOS.