Former national coach David Trist said New Zealand's players "will need counselling in some cases" after a similarly lopsided score in the opening Test, where the Black Caps managed only 45 runs in their first innings. 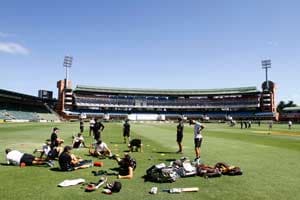 The Black Caps' latest humiliation on their "tour from Hell" to South Africa shows the team is rudderless and has been woefully outclassed, New Zealand media said Tuesday.

"A mismatch of epic proportions" was the Christchurch Press's take on New Zealand's capitulation in the second and final Test in Port Elizabeth, where the hosts enjoyed a thumping innings victory.

Former national coach David Trist said New Zealand's players "will need counselling in some cases" after a similarly lopsided score in the opening Test, where the Black Caps managed only 45 runs in their first innings.

"It's been the tour from Hell, in more ways than one," Trist told Radio New Zealand. "Nothing has gone right really. It's been a wake-up call for New Zealand cricket."

Trist said the tourists had been unsettled by coach Mike Hesson's controversial decision to sack Ross Taylor as captain before the tour and replace him with Brendon McCullum.

"They were rudderless at the top, in terms of a new coach who looks out of his depth to some degree, management around him that probably needs to be questioned and a captain (McCullum) who was caught in the perfect storm," he said.

"There have to be some serious questions asked by some independent people who are prepared to speak out and make sure that this kind of tour doesn't happen again," he said.

He said England's upcoming tour of New Zealand could turn into a commercial flop if the team did not improve.

"If the Black Caps' present form continues, the tour could lose appeal early... with little sympathy likely to be afforded by a tired and frustrated public," he said.

A three-match one-day series between South Africa and New Zealand starts on Saturday.

Comments
Topics mentioned in this article
Cricket Brendon McCullum South Africa Cricket Team Pakistan Cricket Team Ross Taylor New Zealand Cricket Team Michael James Hesson
Get the latest updates on ICC T20 Worldcup 2022 and CWG 2022 check out the Schedule, Live Score and Medals Tally. Like us on Facebook or follow us on Twitter for more sports updates. You can also download the NDTV Cricket app for Android or iOS.