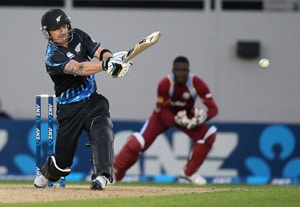 New Zealand defeated the West Indies by 12 runs on the Duckworth/Lewis method in the first Twenty20 international at Windsor Park on Saturday to take a 1-0 lead in the two-match series.

Replying to the home side's total of 132 for eight off 18 overs in the rain-affected match, the tourists were ahead of the required rate at 117 for five off 15 overs when persistent rain and fading light forced the umpires to call a halt to the match.

The final match is scheduled for Sunday at the same venue.

Brendon McCullum spearheaded the run-chase for the Black Caps, the captain underlining his reputation as one of the most prolific scorers in the shortest form of the international game with an innings of 40 off 35 balls

His knock, and the support of Ross Taylor (28 not out), overshadowed the pulverizing innings of 52 off 39 balls by Andre Fletcher that paced the West Indies to what seemed a competitive total after they were in early trouble at 10 for two.

Fletcher and Darren Bravo (30) put on 88 for the third wicket, but the excellent bowling of seamer Tim Southee (2 for 20) restricted the home side in the critical final overs of the innings.

Comments
Topics mentioned in this article
New Zealand Cricket Team West Indies Cricket Team Cricket
Get the latest updates on ICC Women's Cricket World Cup 2022 and IPL 2022, check out the Schedule , Live Score and IPL Points Table. Like us on Facebook or follow us on Twitter for more sports updates. You can also download the NDTV Cricket app for Android or iOS.