South Africa cricket coach Gary Kirsten has said that negative remarks by his Australian counterpart, Mickey Arthur will only serve as a motivation to his team during the tour of Australia. 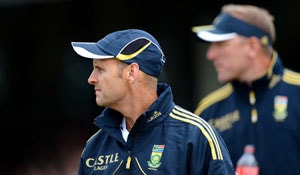 South Africa cricket coach Gary Kirsten has said that negative remarks by his Australian counterpart, Mickey Arthur will only serve as a motivation to his team during the tour of Australia.

Former South Africa coach, Arthur told the Australian media that Dale Steyn, despite being the leading Test bowler in the world, was less effective against left-handed batsmen.

"Put it this way: we will use (Arthur's outburst) as extra motivation for Dale (Steyn)," Kirsten told the Afrikaans daily Beeld here today.

Kirsten said Steyn would do his best to prove Arthur wrong when he leads the attack in the first Test at the Gabba, starting on Friday with what has been described by some as the best in the world.

Kirsten, however, said that he would not like to make comparisons.

"There have been many Test attacks in the past 100 years and I don't want to make such comparisons.

"Our attack certainly comes from great experience, and the most important thing of all is that (the players) believe in their abilities," said Kirsten.

He also warned against underestimating the contribution to the South African team by spinner Imran Tahir.

"A lot will depend on the pitch conditions waiting for us, but a spinner always plays an important role in any Test. Every coach would like to have a spinner of quality and Imran gives me that option," Kirsten said.

The coach said his side had already looked at the possible weaknesses in the Australian line-up, just as they would also have done with any other visitor.

"Any player can score runs in a Test and we must ensure that we bowl decently -- irrespective of who is on the other side of the pitch," insisted Kirsten.