Natasa Stankovic took to Instagram to share a cute video of Hardik Pandya showering their son Agastya with love. 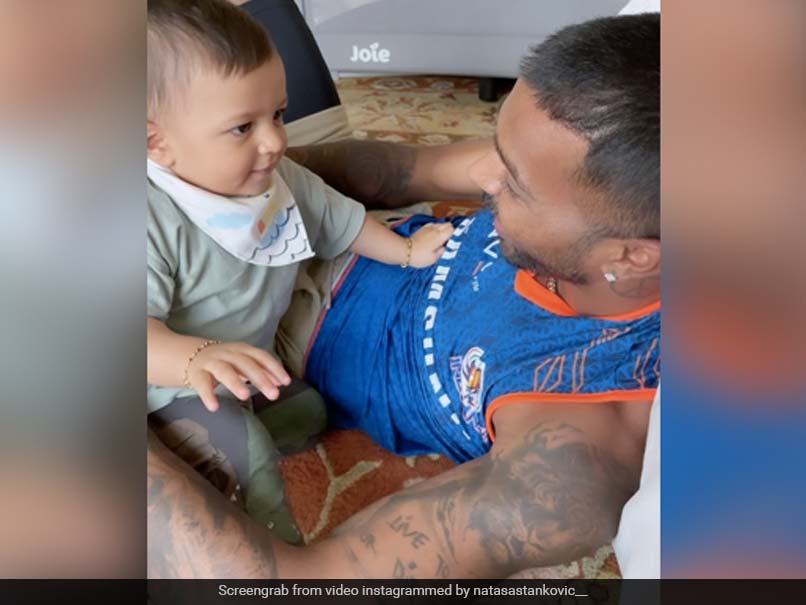 Natasa Stankovic took to social media to post an adorable video of partner Hardik Pandya, spending some quality time with their son Agastya. Hardik and Natasa have been engaged since January 2020, and are known to keep their fans well-updated through social media. Natasa posted the video on Instagram, and it was well-received by fans. Krunal Pandya's wife Pankhuri Sharma commented on it with two heart icons. Natasa and Pankhuri are known to be close friends, as shown by their posts on social media. Meanwhile, Hardik also replied to the post and wrote, "My everything".

Recently Natasa also posted a splendid swimming pool photo with Agastya, which also received a cute reaction from Hardik. Here is the photo:

Hardik is currently with Mumbai Indians (MI) for the ongoing Indian Premier League (IPL) 2021 season. Natasa and Agastya are also with him in the team's bio-secure bubble.

MI are currently fourth in the league table, with four wins and three defeats.

The ongoing IPL 2021 season has been heavily hit by the coronavirus pandemic. Recently, two Kolkata Knight Riders (KKR) players - Varun Chakravarthy and Sandeep Warrier - tested positive for the virus. Also, five DDCA ground staff have tested positive, and the association is hosting matches till May 8.

Many countries, including Australia, have banned direct passenger flights from India due to the rise in COVID-19 cases. Australia have suspended it till May 15.

India has been heavily hit by the second wave of the pandemic. In the last 24 hours, the country has seen a huge surge of 3.68 lakh fresh cases, and has taken India's caseload to 1.99 crore.

Hardik Pandya IPL 2021 Cricket
Get the latest updates on SA vs IND 2021-22, check out the Schedule and Live Score . Like us on Facebook or follow us on Twitter for more sports updates. You can also download the NDTV Cricket app for Android or iOS.