Ziva Dhoni is once again in focus with her new antics. 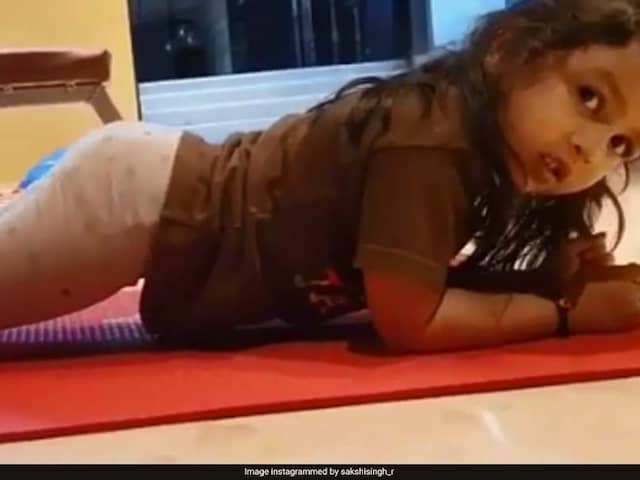 Former India captain MS Dhoni's daughter Ziva has always hogged the social media limelight with her cute and funny videos. The latest video to catch everyone's attention is of her doing planks for the first time. In a short video posted by Ziva's mother Sakshi Dhoni on her official Instagram account, Ziva can be seen doing the planks with ease. "yes yes she managed to do few more seconds than me ... n until I could grab my phone n capture #firsttimeplank #mommyspartnerincrime," the video was captioned.

Ziva, with her videos, has already become an Internet darling but with this particular video, she is bound to have increased her social media following.

yes yes she managed to do few more seconds than me ... n until i could grab my phone n capture #firsttimeplank #mommyspartnerincrime @zivasinghdhoni006 @mahi7781

As soon as the video was posted, users were left to admire Ziva's effort.

One of the users, annie_kri, commented: "@sakshisingh_r she's The most cutest child on The Earth lots of love jiva, siso." While another user, akkhhii55 commented: "Like Dad like Daughter."

In July this year, Rohit Sharma had uploaded a video of Ziva where she was seen cheering for Mumbai Indians, an Indian Premier League franchise that Rohit captains.

Dhoni, who was the part of India's 2018 Asia Cup-winning squad, captained the national side for the 200th time. However, the match ended in a draw.

Dhoni is also the only captain in the history of cricket to win three ICC trophies. India first lifted the inaugural World T20 in 2007 under his captaincy and then won the ICC World Cup 2011. India followed the 2011 World Cup win with a victorious triumph in 2013 Champions Trophy. Dhoni stepped down as limited-overs captain in January 2017.