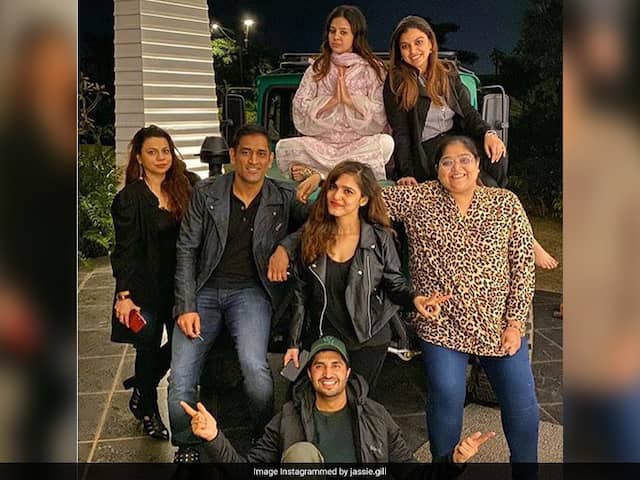 Jassie Gill and his friends with MS Dhoni, Sakshi.© Instagram

MS Dhoni and his wife Sakshi played host to an "unforgettable trip" for singer Jassie Gill. Jassie Gill, whose latest track 'Allah Ve' was released a few days back, took to Instagram to share some of the memorable pictures from the trip. Jassie Gill also thanked former India captain MS Dhoni for hosting him and said, he had a wonderful time. "Thanku @mahi7781 bai & @sakshisingh_r for having us there. We all had a wonderful time !!#unforgettabletrip," Jassie Gill captioned his pictures on Instagram.

Check out the pictures here:

Gill turned 31 last month. He also posted some Instagram stories, in which Sakshi Dhoni can be seen as a part of his birthday celebration. Gill and his friends can be seen in a joyous mood in all the pictures.

Dhoni, meanwhile, continues to stay out of cricketing action. During his time away from the field, he has been spotted enjoying some downtime with his family and friends.

Dhoni, 38, has been out of action from international cricket ever since India lost the World Cup 2019 semi-finals to New Zealand as he had taken a sabbatical.