Mohammed Shami has married his model girlfriend in a private ceremony at Moradabad. 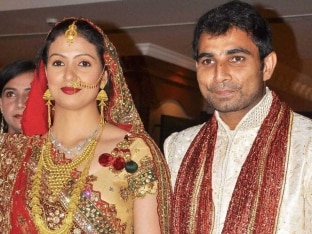 Mohammed Shami has married his model girl-friend Hasin Jahan at a private ceremony in Moradabad on Friday. The 24-year-old Shami, who lives in Kolkata and plays Ranji Trophy for Bengal, met Hasin at an Indian Premier League event a couple of years ago. Like many international sportspersons, Shami too took a liking for models.

Speaking to sports.ndtv.com, Shami's father Tauseef Ahmed said the Nikkah was at 4 pm and the reception was at 7 in the evening. It was a family affair and some close friends were invited. "We didn't invite Shami's Indian teammates as we were not sure about their schedule. The family will plan a reception either in Kolkata or Delhi depending on when the players are available," said Ahmed.

Hasin is an ex-model, informed Ahmed. "Now she will be a housewife and support Shami in his playing career. That's what we want as parents," he added.

Shami's phone was busy throughout Saturday and he was not available for reactions. He is expected to be back to cricket after June 13 when his only sister gets married. "Shami is the middle one of my three sons. He has done well in cricket and as a dad what else can we want?" said Ahmed.

Playing for Delhi Daredevils this season, Shami did not set the IPL on fire but his father is not worried about his son's bowling form. "So many world-class bowlers were treated with disdain. I don't think Shami's performance was all that bad when the entire team failed," said Ahmed.

Shami has been rested for the three ODIs versus Bangladesh later this month. He will be part of the attack on the long tour of England starting July. Known for his reverse swing, Shami has played six Tests so far, bagging 27 wickets with a best of 5/47 against the West Indies at Eden Gardens in November 2013.

"Playing for India is very important for Shami. He has done well on the tours of South Africa and New Zealand and should do well in England too," said Ahmed.

Lady Luck should also bless the Bengal seamer, who has also played 29 ODIs for India, taking 50 wickets with best figures of 4 for 50 against New Zealand in Napier in January this year.