Matt Prior Promises to Hit Back Hard at Kevin Pietersen's Attack

Kevin Pietersen slammed England team's culture in an explosive interview but Matt Prior has vowed to hit back at him, especially as he was 'targeted' specifically. 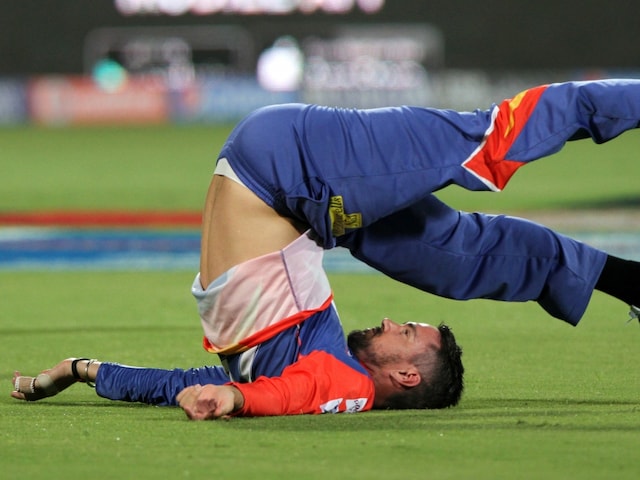 Fact or stretching it a little too much? Kevin Pietersen has revealed that fear ruled England cricket when it was under coach Andy Flower.© BCCI
London:

England wicketkeeper Matt Prior on Monday pledged to respond to former international team-mate Kevin Pietersen's claims that he was "back-stabbing" and a "bad influence" on the team.

Pietersen made the accusations in an explosive interview with British newspaper the Daily Telegraph published on Monday, ahead of the release of his autobiography on Thursday.

The South Africa-born batsman, axed by England earlier this year, claimed there had been a "bullying" culture under former head coach Andy Flower, but saved his most stinging criticism for Prior.

Responding on Twitter, Prior wrote: "Obvs (obviously) sad to see the accusations against me this am (morning) and I WILL have my right of reply! However today is not the day and Twitter is not the place for it!

1/2 Obvs sad to see the accusations against me this am and I WILL have my right of reply! However today is not the day and Twitter is not..

"Now back to my Achilles rehab and learning to walk again! have a great day everyone."

He also joked: "After this morning, I'm looking forward to reading the full kp book. Might bully my kids into getting it for me for Xmas!!"

After this morning I'm looking forward to reading the full kp book. Might bully my kids into getting it for me for Xmas!!

Pietersen claimed that Prior was the ringleader of a group including senior bowlers Graeme Swann, now retired, Stuart Broad and Jimmy Anderson, who would lay into their team-mates for dropping catches.

"The double standard for me was the bigger thing. If one of them messed up -- if Jimmy messed up, or Swanny -- nothing was ever said. Prior left them alone," Pietersen told the Telegraph.

"I went after Prior and said Prior shouldn't be in that side because he's a bad influence, a negative influence -- he picks on players. He's back-stabbing, he's horrendous, he's bad for the environment."

Meanwhile, the England and Wales Cricket Board (ECB) said it was "impossible" for it to comment on Pietersen's claims prior to the publication of his book.

"We have not had an opportunity to see the book yet as the publishers have declined to provide us with a copy before the official release date," the ECB added.

Comments
Topics mentioned in this article
England Cricket Team Kevin Pietersen Matt Prior Alastair Cook Cricket
Get the latest Cricket news, check out the India cricket schedule, Cricket live score . Like us on Facebook or follow us on Twitter for more sports updates. You can also download the NDTV Cricket app for Android or iOS.